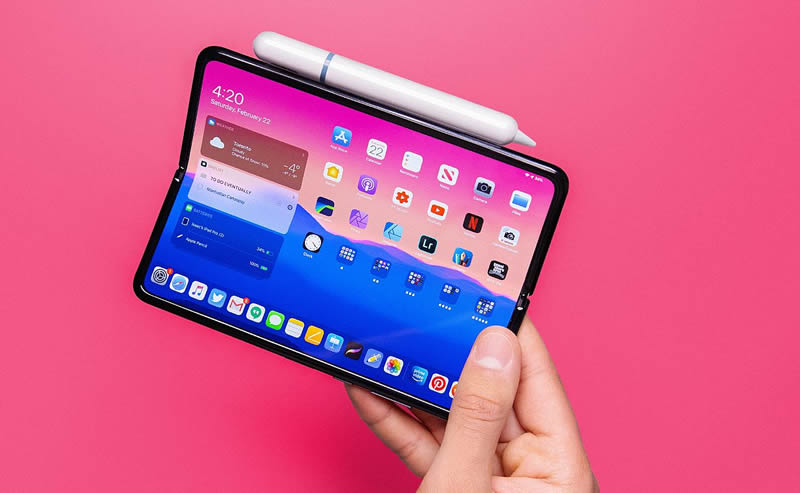 6 min read
FacebookTwitterPinterest
DEALS: The latest iPad Air with 256GB of storage is $70 off

Have you already heard about Apple’s future prospects for the iPad iPhone or iPad MacBook hybrid? I guess that’s the reason you’re seeking detailed information on that. If yes, you’re browsing the right content. The following article bags everything about foldable iPads that are making noise all around. Stay tuned as I uncover everything in the most enticing manner.

Before taking a shot at the probable features, let’s understand when you can expect the next-gen iPad to hit the shore.

We all know that foldable iPads are on their way to being a thing of the future for sure, but when? The query packs its own follower base and has been troubling tech lovers worldwide for quite some time now. Sadly, we don’t have any straightforward answer as of now; however, the following predictions will help you attain a better grip.

It was back in 2018 when Merrill Lynch, analyst Bank of America for the first time ever, took the modern-day media to forecast the release of foldable iPads by 2020. Well, we’re already 2 years ahead of what Lynch anticipated.

In the later stages, Mr. Jon Prosser’s inside source started claiming that Apple in no way is going to bring foldable iPads to the scene until we reach 2023, that too at the earliest. Renowned Apple analyst Ming-Chi Kuo alongside investment firm EqualOcean had a similar take. Kuo’s prediction underwent drastic alteration when a note released in September 2021 suggested the due to be stretched until the second half of 2024.

Although everything looked set for 2023, Display analyst Ross Young’s recent report indicated further delay. It was just a few days back when he suggested that 2025 looks like a possible bet. Still, you never know if Apple has already planned an early surprise.

Now that we’ve Galaxy Z Fold and Galaxy Z Flip coming from the home of Samsung, expecting something similar along the lines from Apple won’t be a good idea, at least that’s what I think. On that note, you may find Apple featuring an unusual name like Mac Pad.

Although we’re years apart from knowing the actual name, playing the guessing game won’t hurt. Use the comment section below and let the community learn what you think Apple will call its first foldable iPad.

Admit it! One element that strikes our brains right after hearing foldable iPad is their overall design. Bringing the inner designer out and structuring the possible overview of the future Apple foldable is fun. Still, before getting engaged in the world of imagination, it is better to know what top-notch bodies suggest.

According to a report released by Bloomberg, Apple might adhere to something that reflects the old days flip phone. As per the renowned analyst Ming-Chi Kuo, Apple is certainly planning to come up with a larger variant so that the available competitors can’t hurt the iPad sales much.

Apart from that, just as usual, you can expect the iPad foldable to look much like a normal iPhone when folded, and the unfolded variant should reflect an iPad Pro.

The display of the future foldable iPad brings a number of arguments together from different ends. Let’s understand what everyone had to say and then give ourselves some time to think about who might be predicting the future correctly.

Traveling two years back, Jon Prosser took to Twitter and revealed that the future foldable iPad wouldn’t be working on a single flexible display. Instead, the device might bag two separate displays linked by a hinge somewhere in the center. The hinge would possibly act as a salt bridge.

A year later, Bloomberg came up with a report suggesting that Apple might have an idea on a prototype foldable display that operates similar to how Samsung flips do. The prime focus being the availability of an invisible hinge. Now that’s something a bit different from what Prosser had in mind.

That possibly made Prosser think once more, and in February 2021, he revoked the idea of the dual-display course and started talking about the display model that Samsung’s Galaxy Z Flip 3 follows, but a bit better, maybe.

Soon after, a prediction from a Canada-based investment research firm named EqualOcean clicked in. Again, they suggested Apple’s focus on bringing the same but better single-display foldable. They added that the prototype might resemble the iPad mini when unfolded to some extent. Taking the prediction a bit further, EqualOcean made a statement that Apple could possibly launch a foldable iPad whose screen may stretch somewhere between 7.3 and 7.6 in when unfolded. Moreover, the prediction for Apple Pencil compatibility was also made, and that too on a positive note.

The numbers, however, rested a bit on the higher end when in May 2021,  Ming-Chi Kuo highlighted his thoughts. According to him, 8-inches that’s what the unfolded display may stretch up to. He further added that the future display might bring together a combination of QHD+ flexible OLED. Still, assumptions, though, and the possibilities for alteration is wide open.

One thing is for sure; the foldable iPads aren’t going to be cheap unless Apple decides to bring a revolution. However, if you ask me the exact numbers, that would be a real hefty task. Also, the fact that the expected release date is still 2 years (at least) makes the entire scenario more complicated.

Considering that we’re currently living in a time frame where multiple cameras are a trend, finding Apple sticking as many of those in the foldable iPad won’t be surprising. Similar to what a standard device features, you can expect the future flip devices to bag one or two at the front and a  few more on the back. Also, the fact that that foldable iPad is going to be an ultra-premium addition, expecting best-in-class cameras isn’t a bad deal.

In case you’re curious to learn about my expectation, I must say that the Foldable iPad is going to be a powerful device to have by your side. Currently, Apple uses A-series processors for its iPhone, and the iPad Pro features the M1 silicon chipset. It would be fascinating to see if the company works on devising a hybrid or wishes to stick to the ones in line. Whatever might be the case, a foldable iPad must reflect high-end performance. Surely nothing can be more disappointing if the hype fails to live up to the execution anticipation.

From what has been circulating, a foldable iPad is something still very new and raw to discuss. But the continuous flow of news makes it hard for tech buffs like me to form a barrier. That same feeling urges me to research a bit every day and assemble a collection of relative resources.

Here in this write-up, I’ve uncovered everything I know so far. From design to display, release date to pricing, each element features something thrilling. Make sure you don’t miss out on any.

Bookmark iPadinTouch and make sure you never miss an update from Apple’s tech line up.