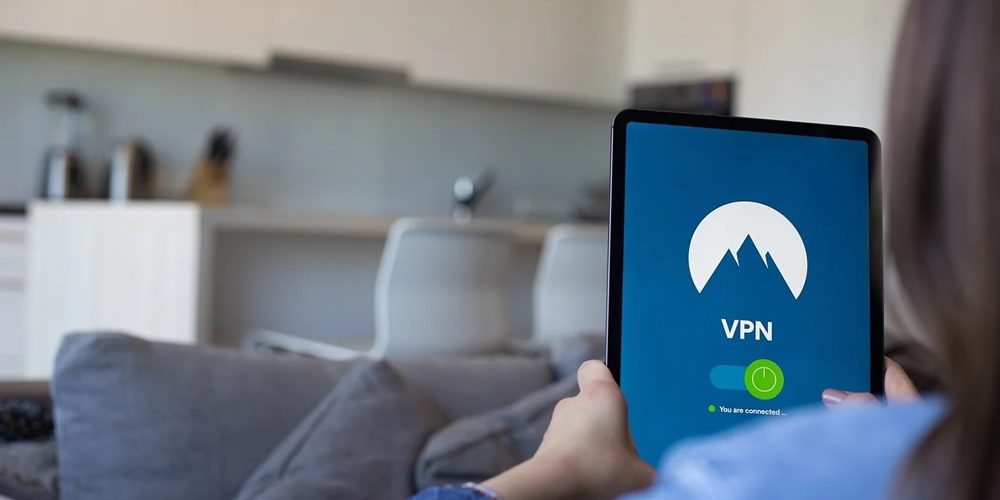 The Best VPNs for iPad and iPhone (Running iPadOS/iOS 15)

13 min read
FacebookTwitterPinterest
DEALS: The latest iPad Air with 256GB of storage is $70 off

A enjoy a private and secured internet browsing experience, you’re better off picking one of the best VPNs for iPad and iPhone out there. Here’s our detailed guide on the best VPNs for iOS 15 and iPadOS 15 you can grab right now, and why you definitely must.

Ever since the very first Apple iPhone was unveiled in 2007, the company has excessively focused on data privacy and security. One of the primary excuses Apple makes for its closed-loop ecosystem of iDevices, is to ensure the minimal presence of viruses and malware.

Over the years, revolutionary features such as iCloud for secured storage, and Touch ID / Face ID have further bolstered the claim of iOS and iPadOS being the most secure mobile platform in the world. However, smart devices aren’t limited to the data you store on it, and even the iDevices cannot escape the clutches of the ISP (Internet Service Provider).

Mobile devices are an extended personality of who we are, and with the latest software update for the iPhone and iPad, Apple isn’t taking user privacy lightly. With the release of iOS 15 and iPadOS 15, the slew of privacy features has been added to the system.

The Safari browser app now allows you to take control of the passwords saved on websites and monitor them for any vulnerabilities. The Security Recommendations section gives you a quick highlight of which website passwords may have been compromised recently. Apple is also revamping the security layer in the App Store to integrate a privacy section. Before you go ahead and download an app for the iPhone or iPad, you will be greeted with a list of permissions and activities that the specific app will require.

A new feature of iOS 15 / iPadOS 15 notifies you every time a certain app tries to track your data across apps and websites. You can either choose to allow all apps to track you, or limit it for some of the intrusive apps. Additionally, Apple has updated the Safari browser app to provide you a comprehensive report through the Intelligent Tracking Prevention feature. Built with the intent to reduce internet tracking by third-party clients, the Privacy Report compiles a list of trackers on each website, and highlight the recurring ones.

The increasing online surveillance by federal agencies, and the bombardment of cyberattacks from all across the World Wide Web has made users extra cautious. Many among us are turning towards the best VPNs for iPad and iPhone, most of which are built to provide complete anonymity when browsing the internet. But a simple search on the Apple App Store and you will realize there’s a sea of VPN services to choose from.

However, not all VPN services are built equal, and picking the right one can be a tedious job if you don’t know what aspects to factor into the decision-making process.

Apple has become the industry standard in mobile encryption, putting your private data ahead of everything else. While iOS 15 further improves on the already rock-solid privacy features, the jurisdiction of the ISP in connecting to the network, is where even Apple’s iron-clad security has no power. A large chunk of iOS apps (despite Apple’s push) does not implement end-to-end encryption.

While the updated iOS 15 software version does give you the opportunity the choose the websites and apps that can view and share your data, Apple itself shares user details with third-party services. Moreover, Apple is a member of the PRISM surveillance program, which means almost all of your private data and media content is accessible to security agencies such as the NSA.

For all iPad and iPhone users who wish to unleash the limitations set forth by the ISP, while keeping their web browsing experience safe, here’s why you still need a VPN on iOS 15 / iPadOS 15.

Unlock regional restrictions – Several websites, as well as streaming services such as Netflix, Hulu, Hotstar, and others, host different content libraries based on the region. Using a VPN on iPad or iPhone allows you to bypass geo-restrictions and access the content that would otherwise be well out of your reach.

Get past the firewall – When using the iPhone or iPad on the corporate wireless network or in the school campus, the websites you can access is heavily regulated. The right VPN client masks your IP address, allowing you to break free from the restrictions of the firewall put in place by the IT department.

No user tracking – Since the basic concept of a VPN is to mask your network IP address, your browsing history would be exempted from tracking. Depending on the VPN service you pick, it would ideally come with a “no-log” policy that keeps all of your browsing data away from prying eyes.

User data safety – The Wi-Fi network at your local coffee shop or amusement park can be a hive for cybercriminals to steal and misuse private data you transfer over the network. Since the VPN encrypts your network traffic right at the source, you never have to worry about data theft of any kind, even on an open wireless network.

Can I get a free iPad VPN?

A majority of VPN services available for free on the App Store are just rebranded proxy services, which do change the IP address of your network connection, but provide no security whatsoever. Some of these free VPNs for iOS and iPadOS are notorious for not only plaguing their user interface with advertisements, but also logs your data and share it with third-party services, which defeats the purpose of using a VPN. However, we’ve listed the two most reliable VPNs for iPad that put security above everything else:

There are dozens of VPN apps on the App Store, and a large number of them are available for free. However only a preferred few like the Hotspot Shield can be trusted regarding security. Advancing high-efficiency network transfer speeds from various geographic locations across the world, Hotspot Shield packs the ability to hide the IP address, provides high-grade data encryption, and is free from data logging too.

When you start with the Hotspot Shield free version, you get to savor the VPN service with permitted access of up to 500MB each day at 2MB/s speed. Since the Hotspot Shield VPN service runs across the entire iOS and iPadOS ecosystem, you can use it with practically any app. It allows you to spoof your regional location and unlock geo-restricted content, no matter if you’re browsing with Safari or accessing the media library of Netflix.

A VPN that has made a name for itself across desktop platforms, as well as iOS for secure mobile browsing, Proton VPN prides its Swiss privacy laws. To unlock the full potential of this VPN client, along with high-speed 10GB/s bandwidth, you do need to subscribe to the premium plans to make the most out of it.

But even under the free membership, your web browsing experience is secured with encryption via PPTP, IPsec, and several other security protocols. You do get unlimited data allowance when using this free VPN for iPad, and while the availability of just 3 regional servers, limits the usability, Proton VPN manages to be among the select few service providers that does not log your private data, and neither does it sour your user experience with intrusive advertisements.

What is the best preminum VPN for iPad and iPhone?

While the free VPN services listed above do a decent job, advanced users will need a premium VPN that does not throttle the network bandwidth, and goes the extra mile. We’ve listed down the most popular VPN clients available for iOS and iPadOS at the moment, so you can pick one that serves you right.

A giant in the VPN industry that has catapulted in demand by offering high-quality service at a reasonably priced plan, NordVPN has reached across not just iOS, but all operating system platforms. Apart from providing an official app on the App Store, NordVPN is available for every major mobile and computer operating system, with dedicated support channels on every medium.

NordVPN has put forward a 30-day refund policy to secure your investment, so you never have to worry about the money you put into it. Although NordVPN may not have the gigantic number of servers such as other names in the VPN business, it effectively operates across more than 50 nations globally with several servers in high-traffic countries such as the USA to guarantee maximum server up-time.

A leader in the VPN service industry, ExpressVPN has strongly cast a wide net across all mobile and desktop platforms, including an official server channel for VPN routers and Apple tvOS platform too. Backed by the assurance of money-back guarantee if you aren’t happy with the VPN within 30 days, ExpressVPN runs seamlessly on PC, Mac, Android, iPadOS, and iOS as well.

Speaking of the VPN’s ability to bypass geo-restrictions, none does it better than ExpressVPN, which hosts more than 130 VPN servers spanning across a total of 90+ countries all across the globe. While it is bit pricier compared to the other VPNs for iPad and iPhone on the list, a rich list of features such as smart DNS proxy and round the clock customer support make it worth it.

A comparatively newer admission into the VPN market, Private Internet Access has still persevered in cementing its name as one of the best VPN for iPad and iPhone out of the lot. The VPN service brings multi-platform support across ten different devices, and is all secured up with premium features such as high-end encrypted network data transfers, website ad-blocking, and a no-log policy in place.

No bandwidth restriction has been put in place by Private Internet Access, which makes it ideal for times when you’re streaming several gigabytes of content in high definition on Netflix and Amazon Prime Video. Supporting remote network servers in 70+ countries globally, Private Internet Access also extends the ability to access the internet with complete anonymity, backed by military-grade encryption.

Apart from the top tier VPN services we have listed above, there isn’t a short supply of other premium VPNs you can get for the iPad or iPhone right now.

Even with the improvements in user privacy on iOS 15 / iPadOS 15, the need for a secure VPN service is not eliminated entirely. The tightened internal security is only as good as the external factors, such as the wireless network you are connected to. By putting some of the best VPNs for iPad and iPhone in between the network connection and the iDevice, you can create an iron curtain of protection from data tracking, geo-restrictions, speed throttling, and so much more.

How to Watch the 2022 Winter Olympics Anywhere

Log4j Vulnerability – How to Keep Your iPad Safe