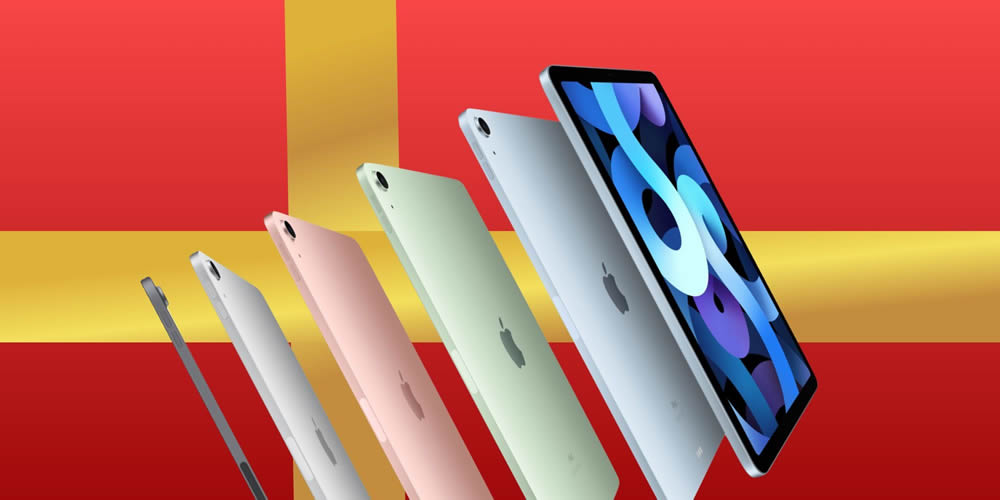 The Top Holiday Gifts for iPad Lovers in 2020

Out hunting for the best gifts for your very own iPad fanboy or fangirl? Here’s our take on every thoughtful iPad gift for the Holidays up for grabs right now.

Apple has a reputation for reinventing existing technology in a way that excites its massive customer base, for all the right reasons. The Apple phenomenon was crystal clear when the late Steve Jobs took the center-stage in 2010 to unveil a tablet device under the guise of the Apple iPad, which shattered the competition into bits and pieces. Almost a decade after the first iPad, the Apple tablet continues to be the best-selling tablet, even while the Android tablet market continues to dwindle.

The iPad has been segmented into the traditional and affordable iPad model, a semi-premium, lighter iPad Air, and the almighty iPad Pro series dedicated to power users and professionals. You can’t just own an iPad and call it quits – there will always be a need to get some extra accessories to enhance what Apple’s tablet can already do. If you’ve got an Apple fanatic in your midst and want to surprise them with a stocking stuffer that enriches their iPad user experience, we’ve got quite the list for you.

The reintroduction of MagSafe charging with the Apple iPhone 12 shows that the company is dangerously close to port-free iDevices. The iPad Pro series has also been minimized to pack just a single USB-C port, which just might not be enough for those who still prefer physical connectivity ports.

HyperDrive Hub Adapter makes a dashing entry with the ability to bring a whopping six different ports to the iPad with just one attachment. Fastened to the iPad Pro charging port, the accessory allows you to connect an HDMI cable, SD and MicroSD card, 3.5mm headphone jack, a USB-A, and a USB-C port, all packed into one.

Although the accessory is not exclusively marked for the iPad, it is a natural match for it due to its industrial build quality and sleek design. The aluminum tablet stand is capable of holding on to everything from an iPhone 12 Mini to an iPad Pro 12.9-inch, constructed for maximum stability even on glossy surfaces.

Available in classic Silver, Space Grey, and Rose Gold color options to pick from, the collapsible hinge design of the Satechi R1 Stand makes it just right to carry around effortlessly. Thanks to the 270-degree mount and base hinge, you are free to enjoy limitless portrait, landscape, or flat viewing angles.

Whether your kids use the iPad as a productive and learning device, or play Candy Crush Saga on it until their brains go numb – you decide. Osmo gives you a choice for the latter with the Genius Starter Kit for iPad designed for children aged 6 – 10 years for an interactive and fun learning experience.

The Starter Kit comes with a total of 7 games, each of which is designed by experts to encourage collaborative learning, mathematics, spelling & vocabulary, problem-solving, and more. Bringing some family time into the activity, Osmo has also included two Family Game Night to keep the entire household entertained this Holiday season.

The iPad Pro, by no means, is an inexpensive device, so carrying it around without adequate protection is risky business. If your loved one is all about the finer things in life, getting them a rugged and plastic-ridden protective case just isn’t going to cut it, which is exactly why we’ve added the TOOVREN Leather Sleeve to the list.

Designed for the iPad Pro 12.9-inch version (2018 and 2020), the PU leather on the exterior looks and feels like the real deal, without PETA going after you. The microfiber inline ensures that each corner and the iPad screen always receive gentle treatment, while the nifty Apple Pencil holder on the back securely keeps your handy stylus in place.

Ask any Apple iPad Pro power user out there, and they will tell you that the only thing separating an iPad Pro from a laptop is a dedicated keyboard deck. Well, Brydge Pro+ is essentially bridging the gap with a wireless keyboard attachment that looks way too good not to be an official Apple accessory.

Available in Space Gray to match the Apple color pallet, this wireless Bluetooth 5.0 powered attachment comes with a full-sized keyboard deck crafted out of aluminum for a surreal quality feel. Promoting iPadOS and its ability to use a mouse pointer with the iPad, there’s a reasonably sized mousepad on the keyboard deck, which latches on to the iPad with a magnetic cover.

While you can find Bluetooth gamepads dime a dozen online, there aren’t many that can boast an Apple-certified rating for iOS, iPadOS, and even tvOS devices. A legacy brand in the gaming industry, SteelSeries has pulled all the stops when it comes to the Nimbus+ Gaming Controller.

The wireless gameplay will be uninterrupted for 50+ hours at a stretch, thanks to the rechargeable battery built into the controller. From the tactile buttons that offer improved response time for high-intensity gaming to the mobile attachment to mount your iPhone or Android right on top of the controller, every gamer will go gaga over this iPad accessory.

Get the SteelSeries Nimbus+ Gaming Controller – $59.99

It is almost criminal how much Apple charges for the higher storage variant of every iPhone or iPad out there, and sometimes you don’t have a choice. RAVPower is here to bring some much-needed democracy to iPad users who need high-speed SSD on the go to transfer and store sizable content.

The RAVPower Mini SSD isn’t much larger than a traditional thumb drive but can process up to 512GB of data at 540MB/s lightning speed. Crafted out of machined aluminum to match the aesthetics of your iPad, the tiny SSD comes with USB-C connectivity and high-end AES 256-bit encryption to keep your precious data secure.

For an audiophile iPad user, the missing headphone jack will be quite the gripe, but this particular pair of headphones would light up their face like a Christmas tree. The Bose QuietComfort 35 has been an iconic model from the audio company, and the updated version continues to take forward the legacy of these noise-canceling headphones.

Built with minimalism and style as the primary focus, the QuietComfort 35 Series II headphones offer a range of dedicated keys for the ANC feature, a multi-function button, and a dedicated button to use Alexa voice assistant. The inclusion of the Bose Connect app for Android and iOS lets you micromanage the audio controls and tweak them to perfection based on your audio profile.

The Apple Pencil is hands-down one of the best styli you can get for the iPad and iPad Pro, but that does not mean there aren’t other contenders out there. Built so well that it even has Apple’s mark of approval, the sharp and precise Logitech Crayon has a creative design with flat sides that offers a better grip and stops it from rolling off the desk, a great alternative of Apple Pencil.

The precision tip is designed for lag-free drawing and annotations as you work on the go, along with palm rejection technology built into it. Offering up to 8 hours of continuous writing time, the Crayon stylus also sports tilt recognition with its dynamic point tip.

Apple has marketed the iPad to be a family device, which is split between the kids watching Disney Channel in the kitchen, to mom using it to buy stuff off Amazon. When the iPad is being passed over as often as a book at the public library, that gorgeous Retina HD display is bound to catch a world of fingerprint, dust, and dirt.

This Holiday season, grab the perfect stocking stuffer in the form of iRoller Screen Cleaner to rid your beloved iPad of smudges, fingerprints, and dirt – all at once. The liquid-free cleaner uses no harmful chemical to wipe clean all kinds of grime from the screen, and can be easily washed for reuse at any time.

The most premium version of the iPad Pro comes with a 12W charger in the box, which might seem like an upgrade from the standard 5W charger that the iPad and iPad Air get. However, why limit the charging speed of the iPad Pro when in actuality, it can juice up at lightning speed of 30W?

The Anker PowerPort Mini II is designed to complement the iPad with its compact design, yet takes a no-holds-barred approach with its PowerIQ 3.0 full-speed charging feature. The folding prongs make it even easier to carry around with your light and portable iPad, with a blue indicator detailed near the outlet.

The only thing that can make a warm bath in the cold winters better is your favorite TV show playing right in front of you. Although the Royal Craft Wood Luxury Bathtub Tray isn’t a dedicated iPad accessory, it can undoubtedly be one of the best for an iPad user to get some relaxing entertainment during their bath time.

The well-built wooden bath tray has a customizable size to fit any bathtub securely, while the cutout for holding the iPad right at the center makes for the perfect viewing angle. Slots on the side for a hand towel, some scented candles, and a glass of wine to truly unwind after a long day score you some extra brownie points with the missus too.

For most people who use the iPad as a makeshift entertainment/navigation system for long drives and road trips, being unable to find a mount stable enough to hold the mighty tablet can be a pain. Cellet offers you a way to trade that extra cup holder next to the armrest for a robust iPad mount that lets you have a smart device right at your fingertips.

The extended 13-inch arm keeps the tablet well within reach while saving the real estate on the dashboard for safe driving. Offering 360-degree rotation in both portrait and landscape mode, the grips are sturdy enough to keep the iPad in place during a bumpy ride, while the soft padding ensures ample protection.

Wrapping it Up with a Bow

In the end, if you’ve completely run out of ideas on what to gift your beloved iPad user this Christmas season, still to the basics. Something as simple as an Apple Store & iTunes gift card will bring a smile to their face, and save you the embarrassment of buying a gift that they barely needed. For as little as $25, the recipient can go to town and spend on products on the Apple Store, or buy themselves a premium subscription for Apple Music, Apple TV+ and so much more.

Get the Apple Gift Card

That’s all we’ve got to show for the best Holiday season gifts that Apple iPad users are bound to fall in love with. Do let us know which of these products is going to make your shopping list this season in the comments section down below.

How to Watch DVR Recordings on iPad?

The Best PDF Reader Apps for the iPad

How to Bypass iCloud Activation Lock On iPad?