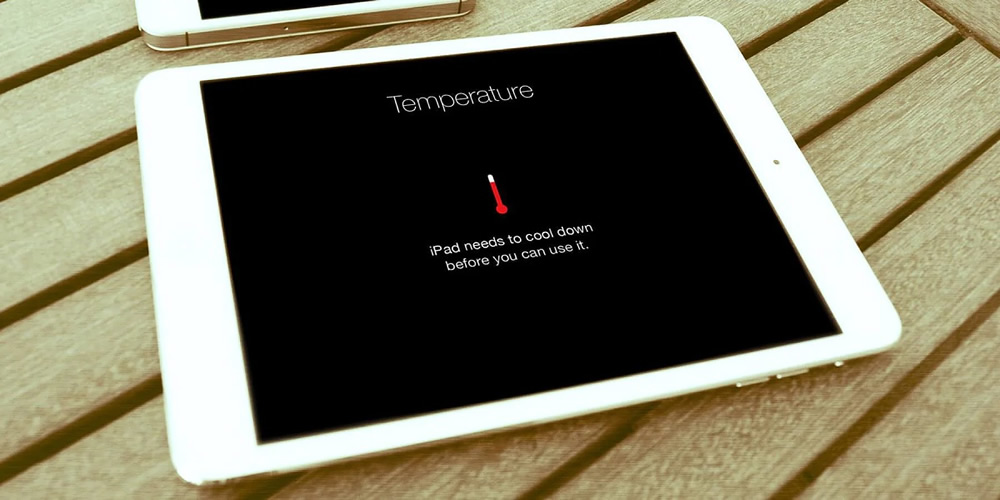 How to Fix Overheating iPad

Even though iPads are sleek and powerful machines that can do almost anything you need them to, they come with a crucial downside: a tendency to overheat. How to fix overheating iPad is a vital query for those who have been experiencing their tablet running warmer than usual.

If your iPad is facing this issue, there are a few things you can do to try and fix the problem. This guide will explore some of the most effective methods for fixing an overheating iPad and bring its performance back to its former glory.

iPad overheating vs. iPad getting warm

iPads generate heat when their processors work, which is why they start warming when you use them for a few hours. On the other hand, overheating can be differentiated from this just by comparing the temperatures of your iPad in both cases. When an iPad gets warm, you can keep holding it and using it, but an overheated iPad becomes too hot to hold and starts to crash and pose other problems.

Why is my iPad getting hot?

There might be many reasons behind your iPad overheating, which might vary depending on your situation. Still, this section will discuss the most common causes of iPad overheating. You can look at these reasons, and if any of these correspond to the problem you’re facing, you can fix it by using the appropriate methods listed in the next section.

Lack of a Fan

It would help if you kept in mind that despite having a strong processor, your iPad is not a fan-powered machine. Your iPad has no built-in radiators or cooling fans, unlike laptops and desktop computers, which have these features. The iPad’s bottom vents are also inadequately sized. Additionally, heat rises, so unless you use your iPad while hanging upside down, the internal heat must accumulate to the point where the bottom speaker vents and the metal chassis are the only places it can escape. All these factors contribute to your iPad overheating.

Too Many Apps Running

Another reason behind your iPad overheating could be a heavy load of apps on your iPad. Depending on the exact model of your iPad, the actual workload might vary, but no matter how strong your processor is, there is always a cap on the number of apps your iPad can run in its background simultaneously. If you exceed this cap, your iPad might start to crash and get overheated.

When your iPad’s CPU has been operating at maximum efficiency for a prolonged period, the system becomes overloaded with heat from all the firing circuits. Keep in mind that, unlike your computer, the iPad lacks a fan. The only processor onboard is forced to handle everything you throw because it also lacks a dedicated GPU.

Even if the most recent iPads with M1 and M2 CPUs beat typical desktop PCs in terms of raw performance, they are limited by the absence of a dedicated graphics card and an adequate cooling system. Hence, regardless of how powerful your iPad is, graphics-intensive tasks are a significant reason it is heating up.

If you spend a lot of time working outside in the sun and the temperature is too high for your iPad to manage, this could cause your iPad to overheat. One example of this might be your workplace, mainly if your profession involves you in a high-temperature environment or proximity to sources of extraordinary heat. This also occurs if your iPad is in an enclosed space and exposed to direct sunlight, such as the truck cabin or in the car.

Power fluctuations are another factor that could cause you to end up with an overheated iPad. One of the ways your iPad could be facing power fluctuations could be a faulty socket, but a more common reason is the use of an unsuited power brick. For example, you could seriously damage your iPad’s battery if you use a fast charger, especially a 98-watt charging brick.

While fast charging can occasionally be beneficial, if it becomes your main method of charging your iPad, you risk doing long-term harm to it. Additionally, the battery may overheat if you use a third-party power supply that Apple hasn’t approved, so this might be something you need to keep an eye on.

How to cool down overheated iPad

Once you’ve discovered the exact reason behind your iPad overheating, the next step is to fix the problem so you can get your iPad back into working condition. There are many methods you can use to fix an overheated iPad, but the most important ones are:

If your iPad is connected to the charger when it overheats, the first step should always be to disconnect the charger. In many cases, your iPad might be overheating due to power fluctuations, so this step might help remove the problem. But even if overheating cause isn’t a fluctuation in the power lines, disconnecting the charger can be helpful in other ways too.

If you’re in a place where the temperature is high, or if you happen to be near a flame source such as a campfire or a BBQ grill, you should move your iPad to a place that has a lower temperature. And no, freezers and refrigerators should never be used for this purpose.

If your iPad is directly under the sun, you can move it indoors or to a place with lots of shade to prevent sunlight from impacting your device. Something similar should be done if you left your iPad in your car and it overheated.

Power off and Restart

The next step in fixing your overheard iPad should be to power off your iPad and wait for it to cool down a bit. Once your iPad regains a favorable temperature, you can restart it and see if it works properly. If it works as it should, you’re in the clear.

Otherwise, your iPad might warrant a trip to the doctor. Oh, and in case the iPad refuses to work correctly after you restart it, you should power it off right away instead of keeping it powered on.

Suppose the methods listed above for fixing overheating iPad work and your iPad’s temperature drops to an average level. In that case, it’s still entirely possible that your iPad might not work right. In these cases, repairing your iPad becomes a massive chore because Apple gives no warranties in the possibility of such damages. But there’s no need to worry even if this happens because we have quite the handy solution for this problem. You can get a tool that repairs your iPadOS by diagnosing all of its problems, and it can be a huge help if your iPadOS refuses to work correctly.

Now there are tons of such tools out there, and it can become quite daunting to choose the best one you can get for your money. And since we don’t want you to waste your money on a subpar product, we looked around and found the best iPadOS repair tool for your iPad. This tool is called Dr.Fone and is a product launched by Wondershare. It is one of the most comprehensive repair tools on the market, and you can’t go wrong with choosing this tool to repair your iPadOS.

Now that you’ve seen the reasons behind overheated iPads and how to fix overheating iPad, you can hopefully take care of this problem and get your iPad back in working condition. Remember to always backup your iPad data before you go around troubleshooting it for overheating. At the same time, if you do end up losing any precious data from your iPad, using a Data Recovery tool for the iPad is a sure-shot way to reclaim it.

iPad Home Button Not Working? Here’s How to Fix It