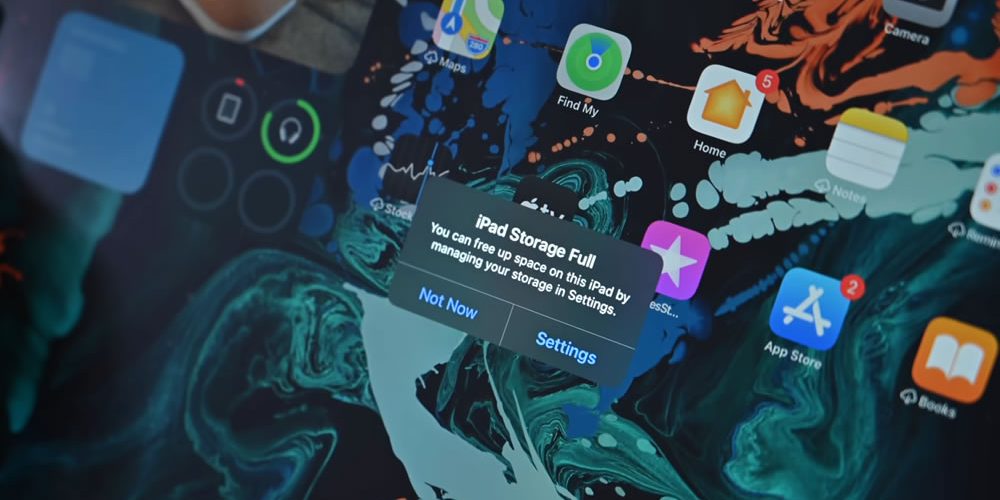 It’s not unexpected for new software updates to have bugs. Yet, no one could have accounted for the magnitude of issues the iPadOS 15 will surprise us. Even the relief of having the M1 chip on iPad Air 5 and iPad Pro is dulled with the iPadOS 15.

The iPadOS 15.4 version is improved on iPad Air 5, but there’s a long way before Apple fixes every issue. When the initial bugs were discovered, Apple updated the iPad Pro 2021 with bug fixes. We might even move straight to iPadOS 16 by then. In the meantime, we can help you with specific iPadOS 15 problems and their solutions.

13 most annoying iPadOS 15 problems and solutions

If your iPad storage is close to complete, a notification alerts you of the situation. They will advise you to not download anything else unless you get rid of unimportant materials.

On the iPadOS 15, though, these storage full alert messages are arriving even if there’s plenty of space in your cloud. Some users have gone through the trouble of cleaning the storage and still continue to receive this message.

One way of getting rid of this issue is by waiting  for the latest software update to reach your Phone. Once you download the bug fixes and restart your iPad, this issue should disappear. In fact, those with iPadOS 15.4 don’t seem to have this trouble.

In case you need more help, click here and dedicate a few minutes to reading the guide on cleaning iPad storage.

Not long after upgrading to the iPadOS 15.4, users have been experiencing rapid battery drain on their iPad. According to support, this isn’t a bug but rather normal behavior after a software update. It takes 48 hours before the apps get used to new software.

Yet, the 15.4.1 update had a fix for the battery drain not long after.

If you can’t upgrade to 15.4.1 yet, you might try conserving the battery via these methods.

We do have a detailed write-up on this particular issue, make you go through that one, once you’re done reading the other troubles iPadOS 15 users face.

If your iPad has the M1 chip, you’ve been pretty excited about using the center stage feature to get on video calls. If the iPadOS 15 update doesn’t let them join by Phone, that’s a bit of an impossibility.

The issue is mainly present in iPadOS 15.4 and later versions. Some tried to delete Google Meet and install it again to see if the Join by phone feature worked. Unfortunately, the results were negative. However, this issue does have a fix.

Join the Apple Calendar to the Google Calendar account. Users have been reportedly successful in joining by Phone with this mini workaround.

The latest iPad models promised high-speed Wi-Fi. Yet, the iPadOS 15 bugs don’t allow Apple to stick to its promises. You have probably noticed the slow loading time for YouTube videos or experienced the Wi-Fi disconnecting at random.

One of those cases seems to be fixed with a reset.

If this doesn’t help, resetting the entire Network setting could provide relief:

You will have to reconnect with every cellular or Wi-Fi network you have used after this hard Reset.

The same method applies to cellular and Bluetooth issues.

Considering we operate our iPhones and iPads primarily through touch, an unresponsive touchscreen is a different nightmare. It’s a weird issue where you can tap on Settings one second but can’t get into the General options no matter how many times you tap on it.

For iPads without a home button, it’s even more of a nightmare.

Until Apple releases a bug fix, the only thing you can do is force a restart.

You can restore your device entirely too. This will take your iPad to factory settings. So, if you have any essential items stored, backup your device on iTunes/ Finder.

#6 No Sound on Some Apps

Instagram and YouTube are those given, commonly used apps for everyone. Imagine our surprise when we found out the latest iPadOS 15 updates have been cutting off the sound on them. Or worse, the sound freezes at odd moments and then comes back.

Fortunately, most users reported fixing the issue with basic activities.

If the sound problem doesn’t solve after the update, delete and reinstall the app.

To delete the app:

#7 Unable to Receive or Make Calls On FaceTime

Oddly enough, most of the bugs with iPadOS 15 appear to be centered around video and sound issues.

Some people can’t make calls on FaceTime no matter how many times they press the green call icon. Others can’t seem to receive any calls. The last thing we want to do is miss out on talking to a loved one because FaceTime won’t work.

FaceTime should be turned on your iPad to work over Wi-Fi.

If any of these hacks doesn’t fix your FaceTime issue, the only thing you can do is wait for a new software update.

If your work involves constantly replying to and sending emails, you are a fan of the email notification sound feature. When your iPad lets you know you have received an email with an audible sound.

Usually, you can choose a specific sound for email notifications. This way, you don’t mistake it with the message sound. Yet, some users have been receiving the Apple standard alert sound for emails after changing it.

It’s not a big issue, but it’s definitely annoying.

What can you do?

For most people, a restart seems to put things in order. After restarting, the notifications appear with the sounds you chose again.

The read receipts feature in messages effectively keeps track of who is ignoring you and who can’t wait to reply before you’ve hit send. A timestamp with the exact second they clicked open your message makes you anticipate their reply.

The downside of this feature is that the receiver gets receipts for when you read their message. The only way to not let them know is to turn off read receipts. Nor you or the other party would be able to get a peak on when a message is read this way.

Here is how you can turn it off:

However, after upgrading to the iPadOS 15, people reported that their read receipt is still on even after turning off the feature. The receiver of their text has informed them off, taking away the sender’s chance to quietly read the message and go about the day instead of hitting reply.

Unfortunately, this is a bug with no known solution. Some people have reported that restarting the device fixes the issue temporarily but persists after some time.

Related: How to Recover Deleted Text Messages on iPad (and iPhone)

Now, you probably are not using your iPad to navigate the streets. You would instead use your iPhone for those purposes. However, the iPadOS 15 appears to have dealt some odd damages to the Apple map.

So, whether you are using Apple Maps on your iPhone or iPad, you notice the number of times it keeps crashing.

The OS 15 also came with many beautiful features for the Apple Maps. This is the crux of the issue. At present, you should simply close the app. Try opening it again.

If that doesn’t work, force stop the app. Press on the app until you see the I icon. You will find the force stop option once you open it.

Then, tap open the app again.

If even that doesn’t help, restarting your iPad is in order.

#11 Gboard Crashes While Searching for Emoji

One of Google’s apps, Gboard, is a popular keyboard despite not being the default app for many Apple devices. Users can search for emojis, and GIFs, change languages, use predictive text, and even Google search directly for the keyboard.

The iPadOS 15 upgrades have somehow caused the Gboard to crash every time you tap on an emoji or use the search to look for GIFs or stickers.

The users have come up with temporary fixes such as:

Users have been seeing this notification “Allow to share data with (null)?” every time they use Siri Shortcut.

This is more annoying than a big issue. However, the point of using Siri Shortcut is to allow the use of data without giving permission every time.

What can you do?

#13 Carplay Not Working with Music Apps

It’s safe to say the only time we listen to music on our iPad or iPhone is when we’re in the car. Imagine the surprise of iPad users when they couldn’t connect their car system to Spotify, Apple Music or Amazon after the update.

Now, it’s debatable whether it’s because of compatibility issues with your car or a genuine mishap on Apple’s part with the update. However, if it’s a problem on their end, they will release an update with fixes soon.

In the meantime, you can:

If the problem persists, pull over somewhere and turn off the carplay. Restart your car and see if it works.

If you use USB to connect to carplay, check it’s a compatible version. If you use wireless connection, check your Bluetooth and Wi-Fi is turned on.

As a last measure, check there isn’t a permission issue.

The first round of OS updates from Apple always leads to some significant bugs. Thankfully, Apple is usually quick to fix those. But until they bring the latest bug fix updates to your Phone, we hope our guide on 13 iPadOS 15 problems and solutions could help you out.

How to Fix Overheating iPad