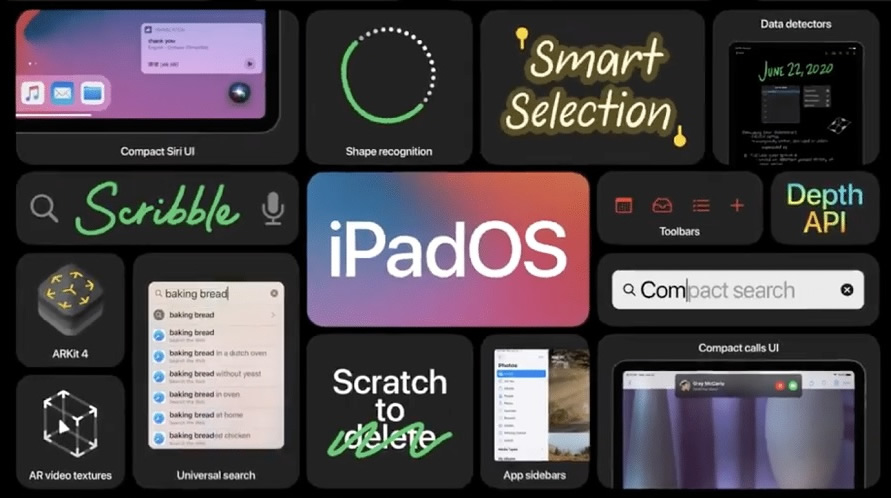 Apple is redefining the tablet experience with iPadOS 14, and here’s everything you need to know about it.

While the year 2020 may go down in the history books as a time period that brought the world to a grinding halt, Apple continued to have a busy year. Although the highly anticipated Apple events took place virtually this year, the excitement towards WWDC 2020 was unfettered. This same event saw the release of iOS 14, and alongside it, the segmentation of the Apple iPad with its very own iPadOS 14. In all honesty, there isn’t a groundbreaking contrast between the two, but it is the extra real estate of the big screen that makes all the difference.

Apart from the borrowed features of iOS, such as the customizable widgets, and the improved Messages app, there are some critical refinements on the iPadOS 14. The addition of a sidebar to the native apps such as Photos and Music, and minimizing the intrusiveness of Siri makes it even more functional. From the inclusion of some key security features to further strengthen its reputation as a secure platform, to adding some vital macOS X features to the tablet version, there’s a lot to look at here. We’re here to talk about the best features of the Apple tablet’s brand-new software version, and how it takes the tablet user experience to the next level.

The Best New Features of iPadOS 14

Suppose you aren’t entirely sure if your iPad is running the latest and greatest iPadOS 14 already, head over to Settings – General – Software Update to confirm it. You should be able to verify that the newest version of the software is installed, which is iPadOS 14.3 at the moment. However, if you’re on an older version, the settings will allow you to download and install the latest update.

One of the most iconic features of macOS X has made its way to the iPad, in the form of a universal search bar, similar to Spotlight. A localized search engine that allows you to browse through the entire iPad as well as the internet and bring back actionable results, Apple does refrain from branding the feature as “Spotlight.”

The redesigned search function on the new iPad software will not take up the entire screen, but instead offer a sidebar, which is again quite similar to macOS X. To make a quick search, you just need to swipe downwards on any screen, which works on the Home screen or within another app, which takes multitasking to a whole new level.

The Apple stylus has been a prized feature for notetakers and digital artists since 2015, and 5 years later, it is receiving some much-needed love. A noteworthy feature of Windows Surface Pen is that you can use it to write anywhere on the screen, but Apple Pencil did not work that way – until now.

Reducing your reliance on the virtual keyboard when using the Apple Pencil, iPadOS 14 allows you to write directly in any text field, and actively converts your handwriting into text. The Scribble feature of the Apple Pencil not only makes jotting down text more effortless than ever, but offers a world of editing features.

For instance, you can select and edit a particular address or phrase written down using the Apple Pencil by just double-tapping it, just as you would a typed text. The handwriting recognition technology is also capable of identifying multiple languages in a single sentence, and can even recognize written texts such as phone numbers and addresses, giving you the shortcuts to make a call or navigation directions using Maps.

Apple did finally give in and introduce widgets to the iPhone, but they were banished to the side screen on the left up until now. With iPadOS 14 coming in to save the day, you can now move around those nifty widgets to any area of the Home screen, and even customize their size based on usage frequency.

The Widget Library enables you to find out all available widgets and handpick the most relevant ones, or you can count on Apple to provide you the best widget combination with Smart Stack. You can either pick the Smart Stack from the available choices, or let Apple’s A.I. identify your usage pattern and change the Smart Stack of widgets based on your activity and time of the day.

For instance, the morning time is when Smart Stack would automatically display widgets for news and alarms, while in the evening you would be greeted with the fitness activity widget. The widget library is being populated every day, as third-party apps join the cause, and since iPadOS 14 does not come with an App Library like the iOS 14 version does, it makes these refined widgets all the more useful.

While it does pale in comparison to the Google Assistant, Apple’s Siri is no lightweight either. However, the smart assistant has not been utilized to its full potential up until now, mostly due to its overpowering nature. Apple has redesigned Siri to be less intrusive on the iPadOS 14, limiting the feature to a tiny bubble on the screen, rather than covering it entirely.

The overpowering nature of FaceTime calls has also been taken down a notch, now that all incoming calls are showcased in a more compact view. Every time you ask Siri for an update on the day’s weather or a question right off the internet, the pop-up notification will bring you an answer, without hijacking the entire screen. Additionally, Apple is starting a turf war with Google by presenting its very own Translate app, which currently 11 languages and Siri support.

While you may not plan to use the iPad for photography, but the inclusion of a critical feature is sure to get photographers and graphic designers all riled up. Apple has introduced its very own ProRAW file format for images that simultaneously saves images after Apple’s A.I. edits, alongside unedited RAW photos. While most users will probably keep this feature disabled due to the large size of the photo, you can enable it from the Camera app by heading over to the Formats section.

By toggling on the format in the Settings does not mean that all pictures you take with the iPad Camera will be captured in Apple ProRAW. Instead, it will enable a RAW toggle within the Camera app, which you can toggle on and off to choose which photos are taken in ProRAW. Photos taken using Apple ProRAW have a RAW tag attached to them in the Photos app.

Blurring the lines between macOS X and the mobile-friendly iPadOS 14, Apple is redesigning the user experience for the stock apps such as Music, Files, Photos, and others. All of these apps come with a single, yet infinitely useful addition of a Sidebar, just like the one you would find on a MacBook.

Since there is plenty of screen space to get some productivity in, the sidebar U.I. element brings simplifies navigation, and displays file information for a broader view of all content. Whether you’re looking at some cherished memories while digging through the different folders on the sidebar, or listening to your favorite tunes on Apple Music while scrolling through your favorite tracks in the playlist on the side – the mighty Sidebar does it all.

The iPadOS 14 updates is being offered to the entire lineup – iPad, iPad Mini, iPad Air, and iPad Pro. Hoping to provide the users with a “laptop that isn’t a laptop,” the Apple iPad is currently available for the following models:

Apart from these significant new upgrades, Apple has brought about with the iPadOS 14 updates, and there are some smaller yet significant tweaks worth mentioning. The ability to change the default browser as well as the email app is like a breath of fresh air for those tired of the restraining nature of the Apple Safari browser and the Apple Mail app.

A welcomed privacy feature to limit app data collection, iPadOS 14 not only notifies you to restrict user tracking, but also displays what kind of data a specific app is tracking in the App Store. Apple Maps is also being revamped with select cities now offering 3D guides, along with cycling directions and E.V. routes for smart car owners to charge up on the way.

Are you among the iPad owners who is figuring their way around Apple’s latest iPadOS 14 update that sets a new precedent for all tablets to follow? We love to know what feature of the new iPad operating system you’re absolutely in love with, so do reach out to us in the comments section down below.