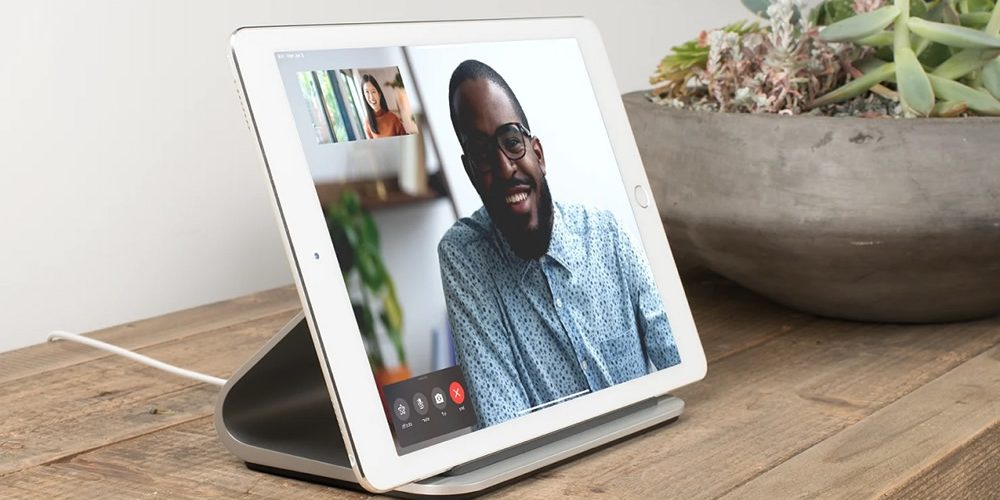 Best Wireless Chargers for iPad – Everything You Need to Know

9 min read
FacebookTwitterPinterest
* Save on M1 iPad Pro: $150 off at Amazon *

The technology of wireless charging is taking over the world, but what about the Apple iPad that doesn’t support it? Here’s everything you need to know about wireless charging on iPad, and a workaround that allows you to charge your iPad cable-free!

Ever since the dawn of smartphones in the early 2000s, several elements on the software and hardware side have been monumental. Features such as video calling and smart payments that we take for granted today, seemed something out of a Sci-Fi movie back in the 20th century. Over the years, there have been plenty of improvements in the smartphone charging space, too, with larger battery capacities to juice up mini-computers in our pockets.

However, wireless charging technology is possibly the most significant one, adding a whole new dimension to our convenience. It took Apple a while to get in the game of wirelessly charging its iDevices, with the iPhone 8 was the one to debut it. The idea behind a wireless charger is for the convenience of never having to plug in the Lightning cable in and out, taking a toll on the charging port. However, Apple has limited the ability of wireless charging to just the iPhone lineup, leaving iPad users fumbling for the charging cable every time the battery needs to be topped up.

Although every Apple iPhone has boasted wireless charging since the iPhone 8, the iPad series has been kept at bay from it. All iPhone models since 2017 are all built with a glass back, while the older, non-wireless charging iPhones before it, came with an aluminum chassis. Glass is a better not just for aesthetic appeal, but for making sure that most of the magnetic charging field from the charging pad makes it to the receiver charging coil inside the phone.

The iPad continuous to march ahead with the all-aluminum chassis, and while it does add durability to it, it comes at the cost of wireless charging. The aluminum metal surface is not ideal for wireless charging, since it ends up absorbing a bulk of the magnetic field radiated by the charging pad. This charge is converted directly into heat, which can send the iPad chassis to soaring temperatures. Since gadgets and heat are a recipe for disaster, no metal-made smartphone or tablet comes with wireless charging, including the Apple iPad.

How to Add Wireless Charging to Apple iPad

The limitation of an aluminum chassis that is a no-go for wireless charging may limit Apple, but it certainly hasn’t deterred manufacturers from finding a workaround. Adding wireless charging to any device is simply about including the receiver charging coil to the back of the device, and while Apple does not do it for the iPad right out of the box, there is a way to do it from the exterior. Back when the iPhone 8 was released, sporting its wireless charging capabilities, third-party manufacturers brought about charging receivers that allow users to wirelessly charging their older iPhones.

The same technology has been extended to the Apple iPad as well, and a single accessory by Nillkin brings you this particular feature. The Nillkin Magic Tags Plus Wireless Charging Receiver for Apple iPad is meant to be the missing piece in the puzzle to bring wireless charging to non-supported devices. Delivering a power output of 2 Amps (10 Watts) to the device, the Nillkin wireless charge receiver is available in both USB-C and Lightning port connection.

Depending on whether you own an iPad Pro or the latest iPad Air 2020 (USB-C), or the older iPad that still holds on to the Lightning port standard, Nillkin Magic Tags Plus Wireless Charging Receiver is available for both variants. Although wireless charger receivers are not in short supply, we recommend the one from Nillkin due to its longer connector, which helps place the receiver charging coil right at the center of the iPad. Built to last, with moisture and corrosion resistance, the wireless charge receiver is designed and certified for low heat emission.

Once you’ve equipped the iPad with the ability to receive a wireless charge, it is time to find the perfect charging pad for it. Another reason why most manufacturers do not equip tablets with wireless charging, since because resting them down for charging would require the charging pad to be much larger. However, there are a select few that have designed wireless charging docks specifically for the iPad, and if you’re looking to enjoy a wireless charging experience on your Apple tablet, just pick one from the list.

Apple started things off with a bang when the iPad Pro 1st and 2nd Generation came with not just more firepower than the regular iPad, but an Apple Smart Connector along with it. Apple included this contact connector in hopes of creating a market of third-party accessories, which hasn’t been entirely successful. Logitech is the only OEM brand to craft a charging dock that uses the Smart Connector, making it the only wireless charger for iPad Pro that works without a charging coil receiver.

Supporting only the iPad Pro 9.7-inch, 10.5-inch, and 12.9-inch models (1st and 2nd Gen), the Logitech Base Charging Stand is crafted out of aluminum for a durable and stylish look. Compatible with most cases and the 70-degree viewing angle that the stand creates, it is perfect for reading, browsing, or just enjoying a YouTube video on the kitchen table. Apple’s MFi certification allows the wireless charger for the iPad to juice up the device at high speeds via the Lightning port on the back.

Since Nillkin has taken the top spot for creating the most versatile wireless charger receiver for iPad and iPad Pro, it makes sense that the same brand created a unique iPad wireless charging stand too. The aluminum stand is crafted to perfection, with a broad base that keeps the iPad in place with no jiggle whatsoever. The wireless charging pad in the stand is movable, which allows you to position it right where the wireless charging receiver is positioned on the back of the iPad.

Paired with the Nillkin Magic Tags Plus Wireless Charging Receiver (which needs to be purchased separately), you are all set to charge any and every iPad, iPad Pro, iPad Air, and iPad Mini model there is. Speaking of the wireless charger itself, the ability to deliver 15W and compatibility with Qualcomm’s Quick Charge 3.0 standard makes the well-built Nillkin PowerHold Wireless Charger Stand not just ideal for Apple iPad, but also for every wireless charging capable smartphone out there.

While it is designed for iPhone, the Azpen Dockall Wireless Charging Station is large enough to accommodate the iPad. When paired with a wireless charging receiver for the iPad, this particular dock can be the one-stop solution you need to not only charge the Apple tablet, but also enjoy an authentic entertainment experience. The base is built with 3 charging coils, so whether you place the iPad in horizontal or vertical view, it will still be able to stay in contact with the charging coil.

The Bluetooth speakers on either side of Azpen Dockall bring a decent audio experience along with it, along with a built-in microphone that is ideal for communication. A slew of playback control on the front, and a wide range of charging and storage connectors on the back, makes this particular accessory for the iPad so much more than just a wireless charging dock for iPad. The ambient cool blue light bar on the front gives you all the more reason to put the Azpen Dockall on your nightstand.

The technology behind wireless charging can almost seem magical, considering how leaving your smartphone or gadget on a flat surface can start charging it up. Now that tech companies have understood, and perfected the ability to charge devices wirelessly, the next generation of this wireless technology is where Apple could capitalize. The current range of a wireless charging pad and the receiver is reasonably limited, so you need to place the device precisely on top of the charging pad to ensure that the battery receives the charge.

If the leaked patent documents are to be believed, Apple is in the midst of incorporating wireless charging into its range of MacBooks and iPads. The documents suggest two-way charging technology to be built into the keyboard deck and screen chassis of the MacBook, which would act as a charging pad for the iPad, iPhone, Apple Watch, and the AirPods too. There is mention of “magnetic alignment” too, which points towards the next step in the newly-introduced MagSafe charging that came out with the iPhone 12.

Even today, brands such as OnePlus has created a 35W fast wireless charger that can power up devices faster than most iPhones can charge via Lighting cable. Although the Apple iPad is not expected to boast a glass back any time soon, once the wireless charging range, as well as the charging speed across the medium, picks up momentum, we could well be on our way to a wireless charging future.

Are you going to gear up your Apple iPad for wireless charging with the accessories listed above? If you have some thought bombs to drop about the future of wireless charging on iPad, do let us know your thoughts in the comments section down below.

The Best Wireless Earbuds and Headphones for iPad (2021 Reviews)