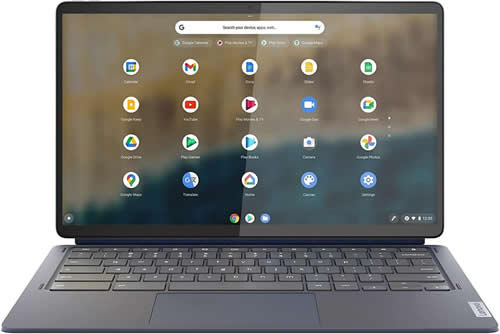 In this era of minimalism, having a large tablet can be very beneficial if you want to avoid carrying your laptop wherever you go. If that’s the case, many large-screen tablets in the market could be a very good option for you. In this post, we will look at some of the best large-screen tablets in the market and try to see the best option for you. So keep reading till the end of the post to ensure you get everything crucial to making this decision.

RELATED: Best Paper Like Screen Protectors for the iPad Pro

Why get a tablet with a large screen

There are many reasons you should get a tablet with a large screen, especially if you move around a lot and need to carry a laptop everywhere for work purposes. A large-screen tablet can allow you to perform just about any work you’d do on your laptop. Let’s take a look at these reasons.

It doesn’t matter if you’re watching a documentary, a movie, a YouTube video, or a music video; having a bigger screen always makes the experience much better. If you’re using a tablet, having a large screen allows you to experience more colors, more vibrancy, and a better overall experience of watching that piece of entertainment. Compared to a cell phone or a smaller tablet, watching content on a large-screen tablet is also easier on the eyes and causes much less strain.

If you’re an artist, a photo or video editor, or even if you’re just someone who uses a stylus a lot of the time, having a large-screen tablet can be a huge boon. With a larger screen, you have more freedom of movement on your canvas, and it can also speed up your workflow from before.

Display quality, performance, and battery life; no matter how you look at it, the 12.9″ iPad Pro 2022 is the best tablet available. Not only is it powered by Apple’s M2 chip, but this tablet also comes with one of the best displays you can get in the market. With this iPad Pro 2022, you get an awesome 246 pixels per inch resolution. So if you use your iPad to edit photos or videos or watch many shows on it, this is just the tablet for you.

Due to the new M2 chip, this iPad boasts some incredible processing power that allows you to essentially use it as a small MacBook. You can use it to edit photos and videos, do your office work, and also use it for entertainment while kipping on the couch.

Using this iPad with an Apple Pencil or Magic Keyboard can speed up and streamline your workflow even more. It also has a great battery life, further securing its spot as one of the best large-screen tablets in the market. However, it is quite expensive, so you should keep that in mind. In short, if we had to choose the overall best large-screen tablet, it’ll have to be the M2 iPad Pro 2022.

The next tablet on this list is the Samsung Galaxy Tab S8 Ultra. If you’re someone who values the display above most other features of a device, this is just the tablet for you. This tablet comes with a truly gigantic screen that is even bigger than the displays of some laptops. It has a 14.6″ Super AMOLED screen, a refresh rate of 120Hz, and one of the best battery lives. Honestly speaking, Samsung made this tablet while keeping designers and video and photo editors in mind. So, if you use your tablet for this type of work, the Galaxy Tab S8 Ultra will be a very good option for you.

With the 14.6″ size of the screen, this tablet is a bit bulky. Even though Samsung has made this tablet as lightweight as possible, carrying around a tablet weighing around 1.5 pounds is not everyone’s cup of tea. However, if you’re a power user and wish to avoid switching to an iPad, we suggest you buy the Samsung Galaxy Tab S8 Ultra.

For Windows enthusiasts, this tablet we’ve picked will be quite special. After the Samsung Galaxy Tab S8 Ultra, the next large-screen tablet that we recommend is the Microsoft Surface Pro 8. With a 13″ PixelSense display and an Intel i7 processor, this tablet is one of the best options in the market in terms of productivity. So, if you’re a Windows user and you do not wish to use an Android or iOS tablet, the Microsoft Surface Pro 8 is the tablet for you.

In order to boost productivity and speed, Microsoft has also added a removal SSD in the Surface Pro 8. This makes your workflow even smoother and is one of the biggest reasons behind the popularity of this tablet. Besides the removable SSD, this tablet also has 1TB of flash storage. The battery life of this table could be better, so that might be a sticking point for you.

The Lenovo Chromebook Duet 5 is a great option if you use Google’s ecosystem a lot, especially with its 13.3″ OLED display. In terms of hardware and processing, it has a Snapdragon SC7180 chip and SSD storage, allowing it to run ChromeOS on it quite smoothly. In fact, this is considered a large-screen tablet and not a small laptop only because it doesn’t have an attached keyboard.

You get a separate keyboard with the Duet 5, and you can dock your tablet in a designated slot to use it, just like a laptop. When using it as a tablet, you’ll experience the usual layout you can expect on a tablet, but docking it changes the interface to be just like a Chromebook. And as a Chromebook, the Duet 5 also has a pretty efficient battery that gives you a backup of around 12 hours of usage.

If you want to use a great iPad but are not convinced about buying an iPad Pro 2022, you should look at the 10.9″ iPad Air 2022. With an M1 chip, this iPad Air is heads above the previous models of iPad Air in terms of processing power. It gives you comparable performance to the iPad Pro while being more lightweight as well as less expensive.

In fact, if the screen size and resolution are factors that you can compromise on, the iPad Air 2022 becomes quite a fetching option. Other than its M1 chipset and superb performance, this tablet also gives you around 10 hours of battery time, which is more than enough for casual use. Also, this iPad’s front and back cameras are nothing to scoff at either.

If you want to use a great Samsung tablet, but you don’t want to spend too much on one, Samsung’s FE tablets are just what you want. In the Galaxy Tab S7 FE, Samsung has trimmed down a few of the more premium features present in the Tab S7 in order to offer a more affordable option.

This tablet has a 12.4″ display and a Qualcomm processor, allowing you to have a smooth user experience. Oh, and it even comes with an S Pen that you can use for an even faster workflow while using this tablet. As can be expected from Samsung’s top-of-the-line devices, you can choose the memory and storage of your S7 FE according to your own needs from quite a wide range of options.

All in all, the Samsung Galaxy Tab S7 FE is a pretty good option for Android tablet users.

For a Chrome OS user, the 13.5” Acer Chromebook Spin 713 is like the holy grail of Chromebooks. It runs on an 11th Gen Intel i5 processor with 8 GB RAM, and with its 256 GB NVMe SSD boot drive, your experience using this tablet becomes really fast and smooth. It also has Intel Iris Xe graphics, which make your visual experience a lot better than most Chromebooks.

In terms of connectivity, it has Thunderbolt- 4 USB Type C ports for fast connectivity. It also has an HDMI video output, making using external monitors and screens much easier. The battery backup provided by this tablet is more than 11 hours, which is pretty awesome.

The internet is rife with rumors about the launch of the Apple iPad Pro 2023, which is rumored to also have a 14.1″ version alongside a 12.9″ version and an 11″ version. Now there are a lot of speculations going around about the specs of this iPad Pro. Still, according to inside sources, this 14.1″ iPad Pro seems to at least have an M2 chipset and 512 GB of storage.

The new 14.1′ iPad Pro is also rumored to have mini-LEDs and ProMotion, and some rumors also say that we can expect a switch to OLED displays instead of mini-LEDs. Wireless charging also seems to be in the plans for the features we can probably see in this new iPad Pro. According to most experts, the launch of the 2023 iPad lineup can be expected quite early in the year, so we might be seeing this iPad Pro in just a few months.

How to decide which large screen tablets are the best

To produce art, make revisions and corrections, and view your masterpieces, you’ll need a high-quality screen with accurate, well-saturated colors, superb brightness, contrast, and exact alignment and geometry. Additionally, all other uses—from serious to lighthearted—benefit, making your experience more efficient and pleasurable overall. So if any large-screen tablet wants to be considered one of the best, it must have a pretty amazing display.

Working with any type of artwork can be made much simpler, more successful, and more effective by factors like processor speed and power, storage capacity and fast memory, etc. And we’re not even talking about the more processor-intensive uses like 3D animation and video editing. Even simple paintings, sketches, and the highest-quality videos and music can demand a lot of memory, processing power, and storage space. Therefore, the best large-screen tablet must also have the best performance possible.

Even though tablets used to be entertainment tools, nowadays, they are also used for business and work. In such conditions, a good large-screen laptop must also have enough hardware and software capability to allow its user to have a smooth workflow.

According to our reviews, the best large-screen tablets available in the market can be summarized as follows: