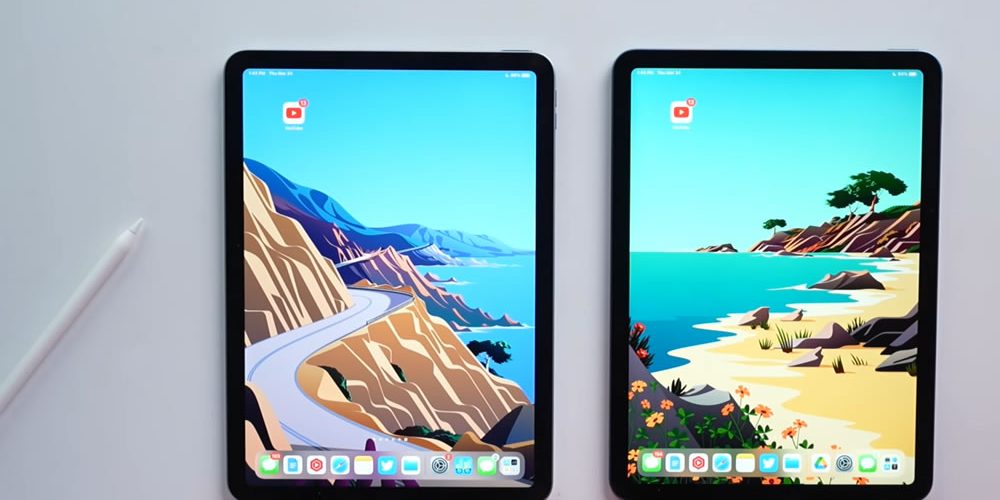 12 min read
FacebookTwitterPinterest
DEALS: The latest iPad Air with 256GB of storage is $70 off

When a new version of an Apple product range comes out, it’s given for us to swap our existing version with the new one. New version means upgrade, that’s what we always think. In the case of the iPad Air 4 and the new M1 iPad Air 5, this might as well be true.

Despite the similarities, the M1 iPad Air comes off as an improved version because of the processor. No wonder you’re thinking whether you should ditch the iPad Air 4 you own for the M1 iPad Air. This depends on if you need a processor so good. In our iPad Air 4 or M1  iPad Air 5 comparison, you will find your answer.

Using the iPad Air 4 vs. using the M1 iPad Air

In terms of design or display, the iPad Air 4 and the M1 iPad Air aren’t that different. These are slim, thin iPads, made to fit into satchels. The kind you can get a good grip on while playing games or note-taking in class.

Speaking of games, this is where the experience with the iPad Air 4 vastly differs from the M1 iPad Air. The M1 processor allows for an iPad with almost laptop-like usability. The display combined with quick loading enhances the gaming experience.

But is it enough to switch over to the M1 iPad Air? We compare the similarities and variances in the next section. You will find your answer there.

If you have the iPad Air 4, you are experiencing some envy for those who can buy the iPad Air 5. It’s the price of the iPad Air 5 which is bringing your mood down more than anything. If it costs the same, wouldn’t it have been smart to wait for 2 years instead of buying the iPad Air 4 back when?

Do you truly have any reason to be jealous? Is it time to ditch your iPad Air 4 for the 5th generation? Or the new changes won’t matter much in terms of what you need with an iPad?

If we weigh the two, the iPad Air 4 is lighter. The difference is insignificant and you won’t be able to tell if you check with your hands. Can you really feel any extra weight for iPad Air 4’s 16.15 ounces to 16.26 ounces of the M1 iPad Air off the Wi-Fi version?

The thinnest and lightest tablet range from Apple, there’s no need for Apple to tamper with what’s already perfect.

It’s in the color variations that we see something new. The iPad Air 4 is available in sky blue, green, silver, space grey, and rose gold.

The M1 iPad Air is in purple, blue, pink, starlight, and space gray. Frankly, we can’t get enough of the blue color. There’s a brighter feel to the new iPad Air but it comes down to personal preferences.

500 NITS brightness, true tone support, 10.9 inches, liquid retina display, and 264 PPI on both models. If the display is your primary concern, there is no need to look at the new M1 iPad Air.

Even the resolution is the exact same 2360×1640. You might assume the refresh rate would be different, but even that’s the regular 60 Hz.

Both are fingerprint-resistant, so if you want to draw away, you do.

There’s actually no point in comparing both because there’s nothing to compare.

Ultimately, both have high picture quality. Playing games or watching Netflix is a pleasant experience on both. The true tone support allows you to bring your digital art to life.

Despite the same 12 MP camera, the image quality for the M1 iPad Air shows definitive improvement. This is because of the image signal processor that’s part of the M1 chip.

What does matter is the front camera, which you often use for zoom calls and Youtube videos.

The front camera of the M1 iPad Air is 12 MP. If you own an iPad Air 4 currently, you know the front is 7 MP and is known to disappoint you occasionally.

On its own, a 7 MP lens isn’t bad. Compare that to a 12 MP Apple camera? It’s obvious the iPad Air 5 wins this round. Especially because the front is compatible with the Centre Stage feature from Apple.

The Centre Stage is like a motion-tracking CCTV camera. Suppose you’re on Facetime and you move, the camera will track your movements. Now, if you go completely out of frame, the lenses won’t be able to follow you. However, the range is quite wide as it is and even goes up and down.

The iPad Air 4 has been the subject of massive praise for its sound quality. There’s bass, punchy kicks, and loud clear music. The dual stereo speaker provides the same experience you expect from actual speakers.

The thing is, the same thing is true for the M1 iPad Air. It’s the exact same 4 speaker grills and amazing sound performance. There’s nothing to compare as you don’t notice any difference in sound.

The USB port for iPad Air 4 connects with Type-C data cable while the one for M1 iPad Air is C 3.1. This allows for a 10 GBp/s transfer speed for iPad Air 5, which is twice the one of iPad Air 4.

If you need to transfer large files frequently, the M1 iPad Air would be a huge relief to you.

As before, the M1 iPad Air doesn’t have Face ID like the iPad Pro. It does come with the Touch ID, which you can use to verify purchase and for login. There isn’t anything different from iPad Air 4 here. Even the storage space has the same 64 GB and an upgrade of 256 GB option.

The stylus you can connect with both is the Apple Pencil 2nd Gen.

The USB port is the most exciting feature in this regard. Again, this is a feature that will appeal to you if you are into editing or drawing. You probably handle some large files and a fast transfer speed can make your day. The read speed is 88 percent faster on the M1 iPad Air. That’s not all. The write speed is even more mind-blowing, with a 3.3 faster sequence.

For the cellular models, the M1 iPad Air supports 5G while the iPad Air 4 is still working with 3G or LTE. So, if your primary mode of connecting with the internet is cellular data, the M1 iPad Air could be more appealing.

This is where absolutely no one testing the two models will tell you the iPad Air 4 is better. For one, the RAM is 4 GB for the iPad Air 4. It’s double, with 8 GB RAM for the M1 iPad Air.

Now, the RAM isn’t the deciding factor when it comes to performance. However, a bigger RAM means more time for apps currently in use, instead of shutting down to save memory.

You can guess the difference in performance from this alone.

In fact, when the iPad Air 4 came out, the majority of the review praised the tablet but lamented the A14 bionic chip.

It’s not that the A14 chip is slow, but for people who were using the iPad Pro with the M1 chip, it’s the one difference that turned them away from the iPad Air.

The A14 chip gives you what you call table-like performance on a tablet. The M1 chip grants you laptop quality speed, performance, and multi-app working relief. It’s all fast swishing motion and switching between multiple apps without glitches. Playing games, editing videos, and practicing digital art is more fun than ever.

Of course, there’s no doubt the M1 iPad Air with its M1 chip has better processing power.

Again, another section where there is nothing to compare between the iPad Air 4 and the M1 iPad Air. Both run on a 20 W quick charge. When using Wi-Fi, the battery should last for 10 hours. On a cellular network, it comes down to 9 hours.

Despite the claims from Apple on the battery power, we’re noticing some differences in the run time. Due to the higher processing power of the M1 iPad, the battery drain seems to be faster. It’s also because the device is capable of working with exhaustive apps it couldn’t with the previous generation. Even streaming seems to have an impact on the battery.

As is always the case, the launch of the M1 iPad Air has led to the departure of the iPad Air 4 from the online and official Apple stores. This doesn’t mean you won’t be able to buy the iPad Air 4 ever again if you want. A quick Google search will list lots of online and local retailers who still have the product in their stores.

Originally, the iPad Air 4’s pricing was $599 for the 64 GB version and $749 for the 256 GB version. This is the same as the current price of the M1 iPad Air. Only, due to the release of the new iPad, there are some exciting discounts in retail stores for the iPad Air 4.

If you would rather buy the iPad Air 4 at a lower price and can live without the M1 chip, now is the time to snatch one.

In comparison to the specifications and price though, iPad Air 5 does come out victorious.

There aren’t many points where the iPad Air 4 and the M1 iPad Air differ. Where they do, M1 iPad Air has the upper hand more times. The display, design, battery, and audio, are all parts where the tablets are the same device.

Yet, there’s no questioning the M1 iPad Air’s superiority when it comes to everything else. From the camera and connectivity options to the performance power, iPad Air blows all tablets out of the water that’s not iPad Pro 2021 actually. It’s still affordable, which is what seals the deal. You’re getting advanced features in what used to be the original price of the iPad Air 4.

However, if you are not a gamer or a heavy tablet user, you don’t need the M1 iPad. If you aren’t drawing, doing some work on Photoshop, or editing videos on your tablet, iPad Air 4 serves excellently for other purposes.

The A14 Bionic chip is still good. If you are taking notes, deleting emails, and getting your PowerPoint presentation done on your tablet, you won’t face any hiccups. The current cheaper market price rules in your favor if you don’t need a high-end device.

The introduction of the Apple M1 chip happened with the iPad Air 5th Gen (2022). It’s possible all iPad Air versions in the future will have the processor.

No, iPad Air 5 and iPad Air 4 aren’t the same. Though there is a similarity in the majority of the features, the M1 chip makes the iPad Air 5 stand out.

Yes, they are the same product. The iPad Air released in 2020 is the 4th generation of the product line.