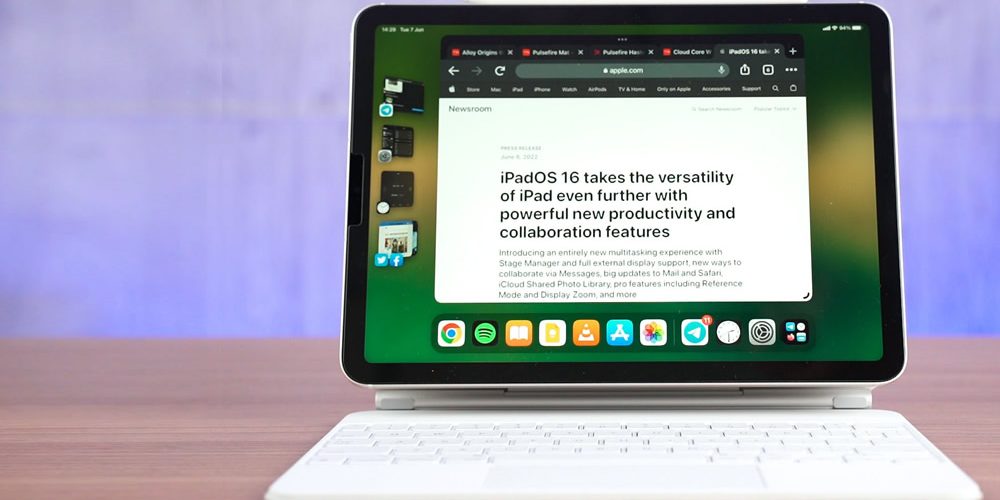 Apple has been presenting its iPad lineup as ‘your next computer’ for a long while.

Some of its ads imagine a scenario where the upcoming generation does not even know what a conventional computer is. However, since their beginning, iPad devices have severely lacked in an area: multitasking.

Sure, the company did introduce split-screen views in recent years. But it wasn’t enough for most people to ditch their computers and start using their iPad for everyday digital needs.

Stage Manager, introduced in the latest iPadOS 16, is set to change all that!

We won’t lie; we have been excited about Stage Manager since WWDC 2022 when the company previewed both macOS Monterey and iPadOS 16. The idea of using the iPad for a fully-fledged multitasking experience intrigued as like anything.

So, as soon as we got our hands on a compatible iPad (more on that later), we got to work. We still wanted to wait until iPadOS 16 reached a more refined stage: at least the Public Betas.

We have been testing iPadOS 16 Public Beta on an iPad Air 5th Generation, equipped with the M1 chip in the past week.

An Introduction to Stage Manager on iPad

Let’s listen to what Apple says about Stage Manager on iPad.

“Stage Manager is an entirely new multitasking experience that automatically organizes apps and windows, making it quick and easy to switch between tasks.”

According to our experience, Stage Manager can change how you use your iPad. For the first time, you don’t have to swipe between different screens to access different apps. Also, unlike the Split Screen view, you are not restricted to two apps. So, you can have as many apps as you have on the screen.

The screenshot shows that I have Mail, Weather, and Gmail apps on a single screen. The three dots on the top of the window allow you to zoom, minimize, or close the app. You can also open another window of the same app.

When you minimize one of these apps, it gets arranged on the left side of the screen. You can click on or drag it to bring it to the front. Similarly, if you want to keep an app aside, you can pull it to the side — which minimizes the app.

So, as Apple says, Stage Manager takes multitasking on iPad to a different level. For example, I can create a Word document while keeping the Wikipedia app open. More importantly, I can freely resize these windows to create a seamless working experience.

We hope you have a clear idea about Stage Manager on iPad.

This is where External Display support for the iPad comes into play.

Of course, iPads have always been able to connect to external displays. But, it was just display mirroring.

RELATED: How to Mirror iPad Screen to Mac / MacBook

Even though some people used display mirroring to set up their iPad workstations, it was barely a reasonable option.

But, iPadOS 16 changes that as well. Starting from this version, M1-equipped iPads can connect to external displays with a resolution of up to 6K.

More importantly, instead of mirroring the primary display, an iPad can now render a new display supporting Stage Manager. As you can see, I have opened a full-sized window of Word for iPad on an external display.

The dock and the menu bar are a mixture of iPadOS and macOS UI designs.

You can instantly move app windows between your iPad screen and the external display. Transferring data and images between apps is also more accessible than ever before.

In other words, external display support for iPad is a complementary feature for Stage Manager.

Stage Manager is available on iPad devices equipped with an M1 chip. It currently means the iPad Air 5 (M1) and the iPad Pro lineup. So, if you have an iPad without the M1 chip, you cannot enjoy Stage Manager or its 6K external display support.

According to Apple, only the desktop-grade M1 chip has the power and capacity to manage multitasking, as assured by Stage Manager. However, we should also consider that all supported devices come with 8GB of RAM, which could be a factor.

Needless to say, this point has bummed out many enthusiastic iPad owners.

To use Stage Manager and external display support, you should upgrade to an M1-based iPad (like we did.)

But, if you have a compatible device, read along.

How to Get Stage Manager on iPad?

Unfortunately, you cannot get Stage Manager on iPad as a standalone feature. It is available only as a part of the iPadOS 16 updates.

If you are waiting for the official and stable version, you must wait until Fall 2022. While we do not have an exact date, we expect Apple to roll out the iPadOS 16 update (alongside iOS 16 and macOS Monterey) in October 2022.

So, your only option to test Stage Manager is to install the public beta of iPadOS 16 on your iPad.

The public beta is more stable than developer beta versions, but you will face some bugs and crashes. So, if you are ready to take the risk, you can follow the steps below to install the iPadOS public beta on your device.

Once you have installed iPadOS 16 on the device, you can go to the Control Center and tap on Stage Manager to turn on the feature.

You can also long-press the button to decide whether you want to show minimized apps and the dock.

That’s it. You can now enjoy all the multitasking abilities from Stage Manager on iPad.

Our Experience with the iPadOS 16 Public Beta

Even though the overall experience is fine, Stage Manager is not at its finest point. Many apps, including the ones from Apple, need optimization for Stage Manager. For example, the system crashed when we tried to open multiple windows and resize them. Of course, we believe Apple will fix these issues by the time of the stable release.

How do I turn on Stage Manager on iPad Pro?

Once you have installed iPadOS 16 on your iPad Pro, you can quickly turn on Stage Manager. You have to go to the Control Center and tap on the Stage Manager button. Your iPad will ask for confirmation when you enable Stage Manager for the first time.

Does iPad Mini have Stage Manager?

No, iPad Mini does not have Stage Manager support. As confirmed by Apple, Stage Manager and external display support are available only for iPad devices equipped with an M1 chip. Since it is not the case with the iPad Mini, the popular iPad will not get Stage Manager. It’s a bummer, we know.

Will Stage Manager work on all iPads?

No, Stage Manager will not work on all iPads. Your iPad needs to have an M1 chip inside to support Stage Manager.

Thumbs up if you could install iPadOS 16 beta and try Stage Manager.

Don’t worry if you think it’s too risky. You can simply wait for a few weeks until the Fall arrives. Then, you’d have access to a more stable version of Stage Manager on iPad.