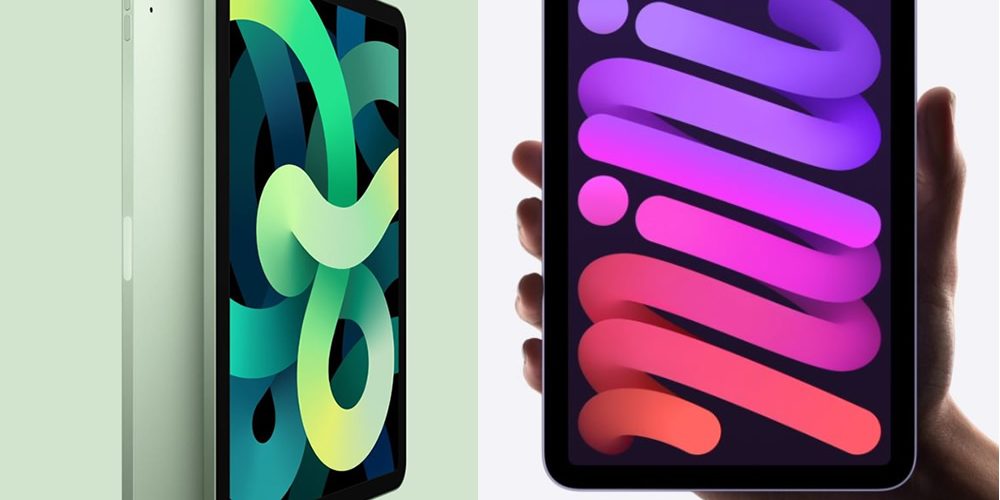 Are you itching to upgrade your iPad and replace it with a rendition that rejuvenates your streaming experience? Apple has recently introduced a breakthrough series of devices for users, with the new iPad Mini 6 being the highlight. If you are still weighing out the best tablet option, our breakdown of iPad Mini 6 vs. iPad Air will help you settle on a choice that works best for you.

The iPad Mini 6 looks like a shrunken version of the iPad Air 4. Apart from the size, there are other noticeable differences as well, especially when you consider the display, processing power, accessories, and camera. In terms of the price, the difference is about a hundred dollars. While the design elements are more or less the same, the size difference stands out as most obvious.

The iPad Mini 6 is equipped with an 8.3-inch display, while the iPad Air 4’s screen has a 10.9-inch display. If you overlook the software features, you will find the iPad Mini to be better in terms of portability due to its smaller size and lightweight.

Its smaller format makes it a much better device for gaming when compared to the Air 4. When using it, it feels very comfortable to hold for an iPad, while feeling bigger than using a phone.

The iPad Air 4 has a much bigger size, which may be less convenient to hold, but a larger display makes for better viewing of content, comfortable multitasking, and easier web surfing since it requires less scrolling. Other than the size, you can also find differences in the quality of the display.

Clearly, the iPad Air 4 and the iPad Mini 6 contend at different segments and cater to different users. If you value a larger screen and better battery life, the iPad Air is the perfect option. However, if you enjoy the portability of a smaller screen and blazingly fast performance, then the iPad Mini 6 is the way to go. Still, if you’re not sure, let’s look at the primary factors of both the tablets and put them head-on with each other to determine the tablet that you should pick.

Both iPads are made of machine aluminum, with rounded corners, small bezels, and squared edges. Volume control can be found on the side of the iPad Air 4, whereas it locates on the top of the iPad Mini. Similarly, both of the devices feature a top power button that offers a new fingerprint sensor for biometric authentication.

Furthermore, the Mini 6 and the Air 4 have a USB-C port located at the bottom for charging purposes, along with connecting a whole host of powerful accessories.  Both devices also come with 2 stereo speakers, one on each side.

In terms of screens, both devices have a liquid retina display. The iPad Air 4 comes with a resolution of 2360 X 1640, while the iPad Mini has a screen resolution of 2266 X 1488. Resolution-wise, the difference is not huge.

The iPad Air 4 displays 264 pixels per inch, whereas the iPad Mini 6 has much higher pixels that equate to 326.  Both of the devices have 60HZ, with a maximum brightness of 500 NITS, along with a 2 toned display.

The larger display of the iPad Air 4 makes it better suited for certain things such as watching content and multi-tasking. On the other hand, the smaller display of the mini is an ideal size if you want to play games. The smaller size also improves ergonomics, since it is easier to hold.

When choosing the winner in terms of the display, you need to focus on the tasks and functions that interest you the most when using the iPad. Rather than going over the nuanced quality differences, figure out which device will be most suitable for your specific usage type.

Both the devices can shoot 4K at up to 60 frames per second and capture slow-motion video at 1080P with 240 frames per second. Both the hardware are similar, however, the Mini 6 has a Quad-LED True Tone Flash, while the iPad Air 4 has no flash at all. Whether this matters to you will come down to how you want to use the camera, and whether you want to take pictures in a dark environment.  Most Apple users use their phones for photos so this may not be an important feature.

With the front-facing camera, the iPad Mini 6 takes the win with an ultra-wide 12-megapixel f/2.4 camera. This new camera on the Mini 6 enables a feature called center-stage where the ultra-wide field of view, paired with artificial intelligence allows the device to track an object as it moves through the frame. Once tracked, the AI feature will automatically control the zoom to ensure that the subject stays framed in the center. This feature can help you conduct great video calls, and also professional content.

Both the devices have four speaker grills, two on each side. Despite the two speaker grill, there is only one speaker on each side of the iPad. This makes for a more directional and immersive stereo sound while watching content or playing games.

When you listen to the speakers of both devices side-by-side, you are most likely going to give an edge to the iPad Air 4 simply because it is louder. This is not to say the Mini 6 sounds mediocre, instead, the quality of sound coming out of this device is rather surprising. Nonetheless, the sound you hear coming out of the iPad Air 4 is slightly better.

When you start evaluating the accessories between the two devices, you will find there to be some similarities. However, there is one major difference. With the updated design of the Mini 6, both the devices now share compatibility with the Apple Pencil. When using the pencil, you find that the writing experience is the same for both devices. Both displays are fully laminated and responsive. Size, again stems out as the major differentiator when using the Apple Pencil.

If you want a larger canvass so that you can draw and take notes, then the iPad Air 4 will be the better choice. Alternatively, getting the iPad Mini 6 will provide you with the most portable way to get second-generation Apple Pencil functionality.

Another major difference in accessory usage has to do with using a keyboard case. The iPad Air 4 is compatible with Apple’s Magic Keyboard and a host of other options. Conversely, the iPad Mini 6 does not have the same keyboard convenience and compatibility.

A keyboard for the Mini 6 would mean a really tiny Keyboard or some type of foldable keyboard that would not be as elegant. It would instead just add bulk to the iPad. It is worth noting that you still have the option of using an external keyboard with both of the options, but if you need the functionality of a keyboard case, then the iPad Air 4 is the better option.

It might surprise you that the iPad Mini 6 has more processing power than the more expensive iPad Air 4. Equipped inside the Mini 6 is the A15 Bionic Chip, along with a 6-Core CPU and a 5-Core GPU. You can also see an improvement in the single-core performance with 1750 for the iPad Mini and the iPad Air 4.

For multi-core performance, the Mini offers a metric of 4324 versus 4281 for the Air 4. Will the average user notice this slight performance improvement? In most cases, the answer is “no”. For the majority of the users, this difference will remain unnoticeable. Both the devices come with 4 Gigabytes of RAM.

That being said, if having the core powerful chip interests you, then you should go for the iPad Mini 6. Gaming on both devices is smooth, without any unnecessary lag or glitches. Handling and control are aspects where the Mini 6 will stand out due to its size. When playing games, you may want to prioritize ergonomics and comfort.

Both the devices are rated for up to 10 hours of either surfing the web or streaming video. If using cellular data, then you will get 9 hours. This is another area of comparison where you cannot get a clear winner. Your actual battery life will depend on various factors.

For instance, the type of game you play can also be taken into consideration, along with the applications you use. Other factors that impact the battery life include the brightness of your display, along with any accessories that you may be powering when using the device.

So which one of the two devices is better? Making this decision is very difficult. Even though the new A15 chip in the iPad Mini 6 is impressive, most people will not even notice the additional processing advantage. If you are choosing between the two devices, your focus should be on the size difference and the type of functions and activities you want to perform.

The size will play a key role in contributing to the things you plan on doing on the iPad. Do you value portability and 5G support? Or do you value a larger display and the convenience of a keyboard and the ability to easily multitask? Other differences such as camera upgrades and audio quality are also worth mentioning.

What is the major difference between iPad Mini 6 and iPad Air 4?

While we’ve tried our best to detail the differences between the two, it all comes down to the screen size. The iPad Air 4, with the reduced bezels brings up the screen size to 10.9 inches, while the iPad Mini retains the “mini” stature with the 8.3 inches screen size.

Why is iPad Mini more expensive than the iPad 9th Gen?

Although the base model iPad offers a larger display than the iPad Mini 6, it costs almost half since every hardware specification is entry-level. From the older processor, mediocre camera, and the basic LCD display, the cost-saving features of the iPad 9th Gen are rivaled by the latest A15 Bionic chipset, driving its cost higher, despite the smaller screen size.

Which is the latest iPad Air?