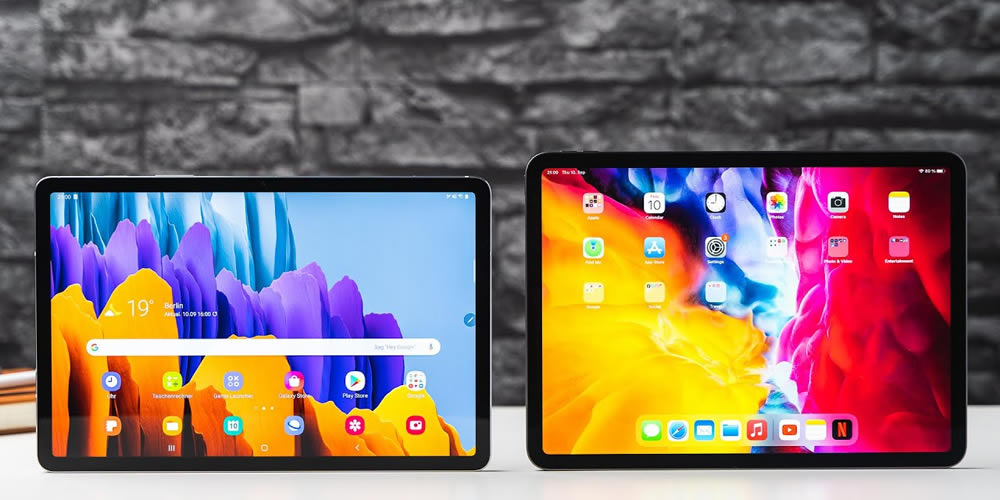 The battle between Android and iOS/iPadOS is raging on for more than a decade now, and both still have their trusted supporters with excellent devices. However, with the release of the new M1 iPad Pro (12.9-inch variant), will Apple finally be able to take the crown?

Tablets have always been stuck in an awkward middle ground between smartphones and laptops. The addition of newer phones becoming larger and larger and laptops becoming more compact than ever before. The argument can be made that tablets have become entirely unnecessary and don’t have a place in the market. However, that is not the case, and people still use them for various other use cases. They are excellent for designers and creative professionals and are a cheaper alternative to laptops for students.

So, which one should you get? Samsung has been the best producer for Android devices and develops excellent tablets such as the Galaxy Tab S7+ that we’re taking a look a today, or should you go with the tried and tested iPad Pro lineup. Follow the comparison below to get answers to all your questions.

Samsung has been developing and improving its Android tablets for years and has been pretty successful with its tablet lineups. However, iPads have also been a critical player in the tablet ecosystem. The new 2021 iPad Pro comes with some of the best improvements that can entirely change the tablet industry. So, should you get Android’s freedom or Apple’s performance and security? Well, let’s find out.

We took a look at the 512GB version of both the devices, and it’s easy to say that Samsung has a lower and more affordable price tag than Apple. The iPad Pro (512GB) clocks in at a hefty $1399, which is a serious investment, whereas Samsung Galaxy Tab S7+ charges you $899 for the device. So, if you’re on a tight budget, then the S7+ is an easy choice to make.

Apple has their iPadOS, which is at the 14.5 version, but it would soon be getting the 15th gen OS, which would bring impressive software changes that take the best advantage of the super-fast hardware it brings.

Samsung Galaxy Tab S7+ comes with Android 11 with the One UI 3.1 skin, which is impressive at what it does. It will be updated to Android 12 as that is released, and Samsung has taken the best advantage of the performance capabilities with the Samsung Dex feature.

However, a comparison between the two isn’t fair, and it all boils down to what you prefer. Do you like the security features that Apple brings or the free nature that Android brings? – Deciding that is your choice, so it’s all up to perspective and preference.

It is no surprise that Apple chips deliver fantastic performance and leave their Android counterpart to play catch up. Don’t get us wrong, the Snapdragon 865+ SOC from Qualcomm is excellent and provides brilliant performance on the Samsung Galaxy Tab S7+. Still, the new M1 chip from Apple dominates in all performance categories and shatters all records.

The M1 iPad scores a whopping 1060247 on Antutu, whereas the Samsung Tab S7+ got a respectable score of 635144. This shows that the iPad is around 65% faster than the fastest Android, and that is really saying something about the impressive M1 chip. You likely won’t see much performance and responsive differences between the two tablets, but when it comes down to it. The Apple iPad Pro will always perform a little better and perform well in higher intensity workloads.

It’s no wonder that design is one of the most integral parts of a device, and it is much more apparent in tablets. The iPad Pro retains the tried and tested Apple design scheme. In contrast, Samsung goes a little further with an innovative design and build for their S7+ tablet by including a magnetic attachment layer for the included S Pen.

The Display is one of the most essential parts of the “Tablet experience” as you interact through it, and it’s the first thing you notice. Both devices have impressive displays, with Apple coming out with their new Mini LED Panel and Samsung sticking with their Super AMOLED display tech.

Fun Fact – Both the displays are made by Samsung, and inherently Apple uses the same tech that Samsung makes.

The Tab S7+ has a Super AMOLED 120Hz HDR10+ (1752 x 2800) panel that produces sharp images and beautiful colours, and the iPad Pro has a Liquid Retina XDR mini-LED LCD 120Hz HDR10 (2048 x 2732) panel, which is very similar to the Tab S7+ panel. So, again it all boils down to personal preference and both the devices would work perfectly for any media experience.

Apple has recently shifted their devices to the USB standard. With the new M1 iPad, they have upgraded it to the Thunderbolt 4 USB-C variant, which is inherently better than the Samsung Galaxy Tab S7+ regular USB-C 3.2 Port.

However, suppose you are not into the Thunderbolt ecosystem and don’t have any devices that support the super-fast Thunderbolt standard. In that case, the difference in the USB-C connection won’t matter to you. But for everyone else, the iPad with Thunderbolt is seriously a big deal, and it also opens a lot of possibilities with the blazing-fast M1 chip.

A full day of battery is impressive and a must with tablets of this calibre. Both of the tablets come equipped with a 10000mAh battery which can deliver some seriously impressive battery life. The iPad has a 40.88 Wh Li-Po cell, and the Samsung comes equipped with a 10090 mAh Li-Po battery.

Both perform admirably and can easily last you a day or more with an average screen on time of 10-11 hours. However, Samsung takes the win as it supports a faster 45W charging process, and Apple has the dated 20W charger that feels like it can take a whole day to charge the device.

Both the devices are great for artists and professionals and support a decent chunk of features that improve the overall experience. Apple has official accessories such as the Apple Pencil and the Magic Keyboard, and Samsung has its S Pen and Keyboard Cover.

Fun Fact – You can personalize your iPad Pro with a personal engraving that Apple will do for free.

However, getting the accessories can cost you a lot and improve the overall cost of the device, but Samsung comes a little ahead as they provide the S Pen for free with the tablet, and you would need to spend a little more for the Apple Pencil.

The world of tablets is continuously evolving and changing, and with tablets like the iPad Pro and the S7+ leading the way, you can rest easy that both of them would last you a long time with some impressive performance to boot.

The Samsung Galaxy Tab S7+ came out a little ahead within the categories we tested, but the iPad Pro is similarly good. However, it is a little more expensive than the S7+ but if that isn’t your concern, then definitely pick the iPad Pro. However, if you are on a budget and looking to get that perfect Android tablet, then get the Galaxy Tab S7+ as it will deliver on all your needs.