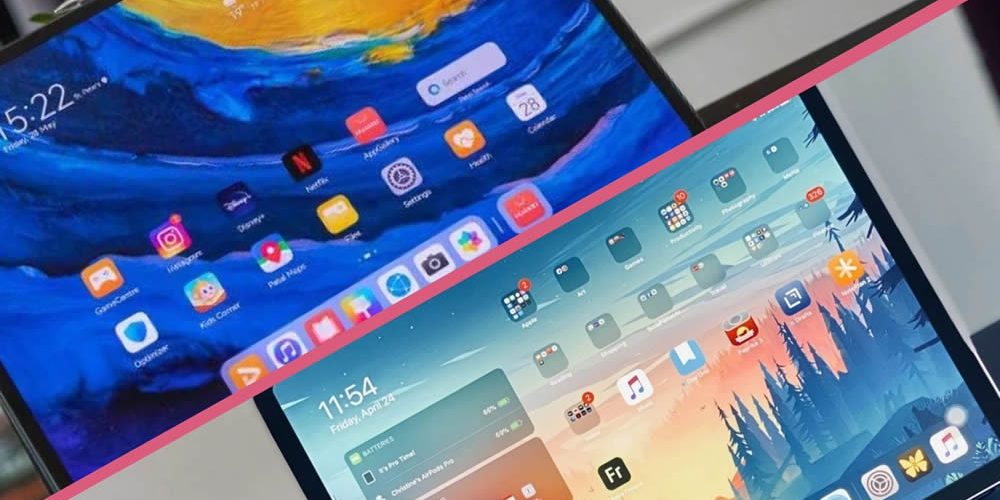 The iPad Pro 2021 is the newly crowned champion, but is the Huawei MatePad Pro 2021 powerful enough to dethrone it? – Let’s find out

The tablet genre started off explosively with the release of the very first iPad in 2021, and was soon followed by a flood of Android tablets to capture the market. All thanks to better technology, ever-shrinking bezels on mobile phones, and the inclusion of 2-in-1 laptops, the demand for the good-old tablet is on a steady decline. In these turbulent times, Apple managed to diversify and keep users interested with two major iPad variants – the traditional iPad for budget users, and the iPad Pro series that rocks the best of Apple is software and in specs.

Fast-forward to 2021, and the latest variant of the iPad Pro is now packed with the revered Apple M1 chipset, which is the same SoC that powers the MacBook series of laptops. The mighty iPad Pro is the top-end tablet that is built for professional performance, with brand-new display technology, ramped up device storage, and enhanced connectivity options with the USB-C port at the bottom. By all means, it is a powerhouse of a tablet that outperforms most Android tablets in the market – but can it stand up to the next great rival that has risen from China?

Google has thrown everything, including the kitchen sink, at the Apple iPad, and so has Microsoft evolved the Surface lineup to compete with the lightweight yet performance-heavy functionality that Apple offers. Chinese giants such as Xiaomi and Huawei have also tried their hand at the tablet market, but to no avail, and while these Android tablets had superior hardware compared to the iPad, there was no competition when it came down to the software.

Despite the tussle with the US Government and its inability to provide Google Play Services preinstalled on its devices, Huawei is making waves by hoping to break free from Google’s Android OS entirely. The first-ever premium tablet to run its homebrewed HarmonyOS operating system, the Huawei MatePad Pro fills the potholes left by the inability of Android OS to stand up against iPadOS, and its slew of tablet-oriented features nowhere else to be found.

Available in 3 different variants of 10.8 inches, 11 inches, and the flagship size 12.6-inch to go toe-to-toe with the largest iPad Pro of 2021, we have selected the largest one for this direct comparison. Pitting both premium tablets against each other in terms of performance and functionality, we’re here to give all the nitty-gritty.

Looking at the iPad Pro 2021, you can barely differentiate it from the previous generation iPad Pro in terms of color and dimensions. However, the two resemble so much that the iPad Pro 2020 case and the Magic Keyboard fit on the 2021 variant, although it might be too snug for your liking. Inspired by the latest generation of iPhones, the aluminum frame is squared to give it a sharp look, with a quad-speaker system to provide you with an authentic surround-sound experience. Coming in hot with 280.6 x 214.9 x 6.4mm measurements, the tablet weighs in at 682gm and is limited to Space Grey and Silver colors.

The Huawei MatePad follows in the footsteps of the iPad, taking most of its design inspiration from its 2020 predecessor. There is a rich pallet of colors to choose from, with Matte Grey, Silver Frost, and Olive Green to pick from, and the punch-hole selfie camera now rests in the thin bezel instead. At 184.7 x 286.5 x 6.7mm, and a weight class of 609gm, it is both, slimmer and lighter than the iPad Pro 2021, while the curved edges make it far more comfortable to hold too.

Apple has certainly upped the ante when it comes to the display screen on the 2021 iPad Pro, featuring an uber-vivid mini-LED display, branded as Liquid Retina XDR technology. Peaking at a whopping 1600 nits of brightness and the eye-catching 120Hz refresh rate that makes it a breeze to browse through, everything from sketching with the Apple Pencil or scrolling through the social media feed is surreal. Speaking of the resolution, which comes in at 2048 x 2732 pixels, you finally have an iPad that gives premium Android tablets such as the Galaxy Tab S7 a run for its money.

Huawei has marketed the screen on the MatePad Pro 2021 as a FullView OLED screen, featuring vibrant colors and deep blacks all around. Setting the display resolution at 2560 x 1600 pixels, the color reproduction is decent but not as pleasing as the iPad Pro or even the Galaxy Tab S7, for that matter. However, it certainly isn’t an underperformer, since you get a Delta E score of less than 0.8 percent, bringing it to flagship-level quality. The disappointment seeps in when comparing the refresh rate, which is restricted to 60Hz. While it won’t disappoint you when watching premium HDR content, the usability is unmatched compared to the iPad Pro.

The crowned jewel of the Cupertino company seems to be the Apple M1 processor at the moment, which finally allowed Apple to break away from Intel. The iPad Pro 2021 is the very first of its kind to feature a MacBook-level processor, which brings a performance boost to almost every task you carry out on the tablet. Photo and video editing apps such as Adobe Photoshop and gaming studios like Larian put the M1 chipset to good use and deliver better performance to the iPad. Since there is no expandable storage, your initial choice of storage space needs to be future-proof, which goes all the way up to 1TB. Running the show with an impressive Geekbench 5 score of more than 7000, the iPad Pro 2021 blows every other tablet out of the water.

While the 10.8-inch and 11-inch versions of the MatePad Pro 2021 are equipped with the Qualcomm Snapdragon 870 processor, the largest variant packs Huawei’s very own Kirin 9000E processor. While the details of how this apparently “banned” SoC will make it to the US markets is still unclear, you can expect the processor to deliver high-quality performance when running apps, with little or no stuttering as you go about your daily tasks. While you cannot add a SIM card to the tablet the way the iPad Pro 2021 comes with 5G support, you do get a proprietary Nano Memory slot, where we sure would have loved to see the standard microSD instead.

Split between the fluid mobile functionality of the iPhone, and the performance-driven actions sported by macOS – iPadOS was born. The operating system dedicated to iPads is a unique combination of multitasking features, core integration of the Apple Pencil, multiple gestures to make the most of the large screen, and support for mouse and trackpad to make it more work-friendly. It may seem like the iPad is neither a premium laptop nor a portable smart device, and that is entirely intentional by Apple, beautified by utility features such as Today View to put your day front and center, and Smart Stacks to sort widgets in an effortless manner.

Huawei has finally broken tradition and taken the bold step of flavoring its tablet with the native HarmonyOS 2.0 operating system. Seen as the Chinese giants’ attempt to snub Google for good, the first iteration of HarmonyOS was just a souped-up version of Android, but HarmonyOS 2.0 is a whole new ballgame. Built on the backbone of Android SDK in some ways, Huawei has enriched the MatePad Pro 2021 with a highly responsive design and packed with customizations for days.

The interface is custom-tailored for the tablet experience, drawing inspiration from both, Windows 10 as well as iPadOS. Functionality is given wings with unique features such as split-screen, floating windows, and quick shortcuts, but it is the limitation of supported apps that puts a wrench in the entire operation. While there is the option to sideload Google apps and services, it needs some serious official support from app development studios to ever come close to the App Store of iPadOS.

While the iPad Pro 2021 is pretty good to use right out of the box, the user experience is incomplete without the productivity tools. The Apple Pencil 2, released a couple of years ago, works exclusively with a limited number of iPad Pro variants and magnetically attaches to the side of the iPad Pro for a stellar look. The real showstopper is the Magic Keyboard, which brings the iPad Pro as close to a MacBook as it has ever been before, with a tactile keyboard and a dedicated trackpad that makes navigation a breeze. In addition, the Lightning Port is a thing of the past, with the USB-C charging port doubling as a Thunderbolt 4 port that opens up an entirely new dimension of connectivity options. However, these accessories certainly don’t come cheap, with the Apple Pencil 2 costing you $129 and the Magic Keyboard Case setting you back a whopping $349.

Following in the footsteps of the iPad Pro 2021, the Huawei MatePad Pro 2021 also offers USB-C connectivity, with two official add-on accessories that turn into a work machine. The M-Pencil brings in a ‘platinum-coated tip’ for more precise writing and drawing experience on the OLED display, and attaches to the side of the tablet, just like its rival, but we did notice the magnetic strength to be much greater on the MatePad Pro. The Smart Magnetic Keyboard offers both, functionality as well as protection, but does not include a trackpad like the Magic Keyboard. Offering a tactile typing experience, the Smart Magnetic Keyboard will cost you around €129.99, and the M-Pencil can be purchased for €99.

The tablet market is not nearly as competitive as it used to be, and we’ve grown accustomed to accepting the Apple iPad Pro as the king of the hill every year. While Samsung does grapple with giving Apple a run for its money, the limited support of Android OS for tablets, does take the South Korean tech company a few steps back each time. In addition, since Google has exited the tablet space to capture the budget computer space with ChromeOS, it does not have enough skin in the game to create an Android OS tablet experience that takes on iPadOS.

This has created the perfect power vacuum for the Chinese giant Huawei to enter the tablet market with a contender with the software, and hardware prowess to take on the iPad Pro. When considering the MatePad Pro 2021 as an Android tablet rival, you will quickly fall in love with how it manages to bump up the specs to the absolute maximum, while absorbing some of the best qualities that the holy trinity (Android OS, Windows OS, and iPadOS) has to offer, under the branding of its very own HarmonyOS.

The release of HarmonyOS 2.0 is enough to put Apple at the edge of its seat, but looking at the broader picture, an operating system is only as good as the app support it receives. With the missing Google Play Services support, you are enslaved to manually installing Android apps, and the inclusion of the Apple M1 chipset into the iPad Pro 2021 also gives it a significant processing advantage over the Kirin 9000E, which is already taking a toll due to the US sanctions.

In our opinion, the Huawei MatePad Pro 2021 is a brave attempt to keep Apple on its toes but falls short on almost every front in dethroning the king of the tablet world for now.