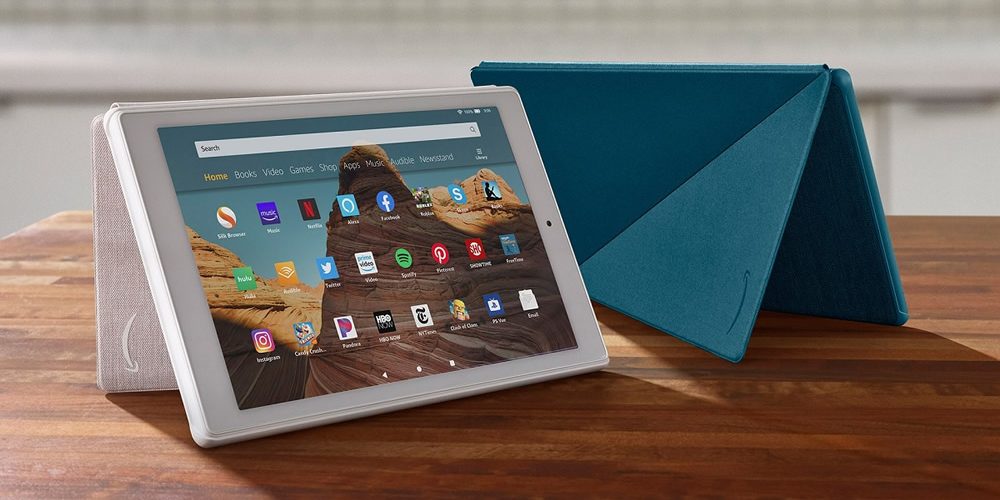 Amazon Fire HD puts all others to shame with its ridiculously low price, but is it enough to demolish the cheapest iPad from Apple?

A decade ago, when the mobile phone was still small enough for you to tuck them into the skin-tight jeans pockets, there was a significant dependency on smart devices with larger screens. Today’s average Android phone screen size is around 6.5-inches, which is almost the same as Google Nexus 7 – one of the most popular Android tablets ever to come out. As a result, tablets have fallen into an unconventional category of users, being either limited for education and family use or the high-end variants built for the core purpose of business users and artistic professionals.

For catering to the masses that still hang on to the idea of having a tablet around the house for multimedia playback, looking up recipes in the kitchen, and keeping the kids busy with YouTube, Amazon has pretty much captured the market of budget tablets with the Fire HD series. At the same time, Apple has upped its game when it comes to premium tablets, such as the iPad Pro, which is breaking the norm by sporting hardware that the latest generation of MacBooks is equipped with. But what happens when Apple decides to cross over into the budget tablet category with its one of the cheapest iPad yet?

Ever since Amazon released the Fire series of tablets running the Android-based Fire OS, it was never planning to take over the entire tablet market. The initial idea was to capture the budget tablet segment, and by keeping the upper limit of the price range under $300, it has managed to obliterate the competition. On the other hand, Apple took over a chunk of the premium tablet space, as well as the 2-in-1 convertible laptop market with the high-end iPad Pro series, and now eyes the budget segment with the iPad 2021 model. But can the leader of the budget tablet market be dethroned by Apple’s longstanding followership? Let’s find out.

The idea behind keeping the price at the bare minimum involves some serious cost-cutting measures, which is seen in the aesthetics of the Fire HD 10. You get a tablet that measures 247mm x 166mm x 9.2 mm, while weighing just about 468gm, making it one of the lightest 10-inch tablets out there. To cut off the excess weight, the entire chassis is crafted out of high-density plastic, which does offer protection, but does feel cheap in the hands. Available in refreshing colors of White, Plum, Black, and Titanium Blue, there are decently large bezels all around the display, which makes it easy to grab on to. The dual-stereo speakers are both downwards facing and rudimentary, but so are the ones on the iPad.

Apple hasn’t done anything drastic with the design elements of the iPad for years now, and we aren’t too sure if it really needs to either. It has curved edges in contrast to the cutting-edge design of the iPad Pro series, and the traditional home button, with the broad bezels does make the design seem dated just a tad bit. Measuring 250.65mm x 174.15mm x 7.5mm and weighing just a bit heavier than the Fire HD 10 at 490gm, you get an all-aluminum frame instead of plastic, giving it a premium look. Apple has kept its love affair going with the Lightning port on the iPad 2021, and we don’t hate it, but it simply isn’t as versatile and convenient as the global standard of USB-C, which the Fire HD 10 2021 is fitted with.

Up until now, the Fire HD series of tablets were classified as devices with a “high-definition display”, but none of them was Full-HD. The Amazon Fire HD 10 is the only one in the roster that sports a crisp 10.1-inch Full-HD 1920 x 1200 pixels, which offers a bright picture and colors that pop, but not nearly as much as they do on an OLED screen. You won’t find any of the fancy bells and whistles like a high refresh rate on display, or Gorilla Glass for added protection, but for the price point, you can’t expect anything more than what you get.

Back in 2019, Apple finally decided to upsize the older 9.7-inch design to 10.2 inches, and the same has continued with the iPad 2020. Another significant improvement is the backlit brightness of 500 nits, which makes it a pleasure to use outdoors, paired with the sharp resolution of 2160 x 1620 pixels that blows every other budget tablet out of the water. While the display does support Apple Pencil, the significant amount of gap between the display and the glass, does make it less desirable for serious drawing and sketching.

Although the core of what powers the tablets from Amazon is Android OS, they have rebranded and re-skinned it as Fire OS, which is based on Android 5.0 Lollipop. Although the base software is more than five years old, Amazon keeps the Fire OS updated to provide you with a sleek interface that is easy to get around, with the entire ecosystem of Amazon apps front and center of the design. In addition, the upgraded hardware of a 2.0 GHz octa-core processor, along with 4GB RAM, should keep you flying through multi-tasking and streaming with ease.

You get the suite of apps such as Amazon Prime Video, Kindle, Amazon Shopping, Audible, and several others baked into the system, along with plenty of ads, unless you cough up a few extra bucks to have them disabled. The lack of Google Play services reduces your ability to do more with the Fire HD 10, and while there is a way to sideload Android apps, we can’t expect the layman user to go through all of the trouble. When it comes to storage space, you can opt for the 32GB or 64GB variant, and there’s always the added benefit of expandable storage up to 1TB.

The one aspect where Apple has everyone else beat is software, since it has a universal policy when it comes to the rollout of iPadOS across all models. The iPad 2020 variant runs on iPadOS 14 right out of the box, which takes the big-screen iOS experience to a whole new level with features such as Stacks, multi-tasking gestures, and more. The Apple A12 Bionic processor is one major upgrade of the 2020 version, which is the same SoC fitted in the older iPhone XS and iPhone XR. Limited storage choice between 32GB and 128GB is made even more restrictive with no expandable storage options, but that’s just a part of the restrictive nature of the Apple ecosystem in general.

What makes the Amazon Fire HD 10 the perfect multi-tasking machine is not the software, but the hardware connectivity. The inclusion of Bluetooth 5.0 makes it the ideal audio streaming and screen sharing tablet for the money, while an upgraded USB-C port adds fast charging to the tablet and opens up a door of connectivity options to the tablet. Since USB-C is quickly becoming the global standard, you can easily find adapters to connect storage drives, HDMI connectors, and more directly to the Fire HD 10.

Although Apple’s love affair with the Lightning port is on its way out regarding the iPad Pro series, the cheaper iPad models very much continue to keep it alive. While you can always find Lightning USB thumb drives, those are expensive, and the type of data you can move across them is relatively limited. There is also no way to mirror the iPad screen without AirPlay. While the Bluetooth 4.2 on the iPad 2020 is decent enough for regular use, the fact that Bluetooth 5.0 has nearly eight times the transmission range, makes it a better pick for audiophiles and wireless connectivity.

The world of tablet devices has evolved over the years, and one size does not fit all anymore, regardless of whether you’re an Apple fanboy or an Android user. Amazon, just as it does with most of the product it sells online, has attempted to create a product that is the most affordable in its price category, while making little to no compromise in terms of quality and performance. Reviewed individually, the Amazon Fire HD 10 is a winner when it comes to performance and value for money, especially your only expectation from the tablet is to allow media consumption and leisure use.

The only reason this sub-$150 tablet fades is when compared directly with the iPad 2020, which has unquestionably shed its skin and emerged as a formidable budget tablet in its price range. With the only gripe being that the design looks dated, you get a superior build quality, software support that is good for five years down the road, and the goodness of iPadOS on a stunning display. Sure, it almost costs twice what you could get for the Amazon Fire HD 10, but in the long run, you end up with a good tablet for its money, even half a decade after the initial expense.